Onlycricket24.com
Shimron Hetmyer has become a father for the first time and he broke the good news on Tuesday morning (May 10). Several cricketers and fans have wished Hetmyer well, for starting the new chapter of life – fatherhood. The post of Shimron Hetmyer went viral as soon as it was posted. It has received lots of love around the World. 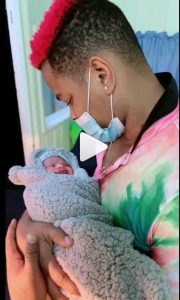 A few days ago Shimron Hetmyer, who plays for the Rajasthan Royals, left the RR camp and abruptly Came to Guyana for the birth of his first child The Rajasthan Royals had announced franchise said that he would soon be joining the team again. They released a video on Twitter, Hetmyer hugging teammates and saying goodbye.

“Babies are born only once and this will be my first. My stuff is still left in the room. It is only because of a special emergency that I am leaving. Don’t miss me too much, see you soon.” said Hetmyer

“Hey world welcome out the bundle of joy, tequila_goddess_nu I love you so much,” caption of the story.