By: Erasmus Williams
Basseterre, St Kitts, April 13, 2019 – A United States military aircraft that landed at the Robert L Bradshaw International Airport earlier this month delivered some 10,000 pounds of food on behalf of a donor to feed an estimated 13,000 Kittitian and Nevisian households classified as poor. 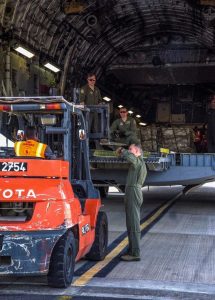 According to a United States Airforce article by Staff Sgt. Della Creech, 315th Airlift Wing Public Relations officer, the humanitarian aid was delivered by the United States joint aircrew from the 315th and 437th Airlift wing’s from Joint Base Charleston, South Carolina on April 6.
The aid was coordinated through the Denton Program that provides non-governmental agencies, international organizations and private voluntary donors the opportunity to use military aircrafts when there is space available to transport humanitarian aid.
Creech said that according to the Denton application, “it is estimated 13,000 St. Kittitian households are classified as poor with approximately 25 percent of the population generating less than $53 (U.S. Dollars) of weekly income.”
“These food packets will provide 70,000 safe and nutrition enriched meals to 5,952 men, women and children of St. Kitts and Nevis, as stated by the community-based organizations of ATime4US Foundation, Incorporated, Mickey’s HOPE, and the Ministry of Social Services and Community Development,” the news release said.
“Seeing the smiles on the people’s face when they receive the meals make it all worthwhile,” said Chris Findlay, aid partner, CEO and President of Source Global purchasing and logistics of Mount Pleasant, S.C. who was on hand to help accept the delivery.
In addition to providing aid to those in need, the mission provided the opportunity for a joint aircrew to obtain required mission training.
“This is an excellent opportunity to enhance the Air Force’s training mission, as well as meeting the humanitarian aspect,” said Hundemer.
“This is a win, win,” said Senior Master Sgt. Ken Hundemer, loadmaster with the 317th Airlift Squadron, Joint Base Charleston. Hundemer works as the Denton Program manager in Charleston in his civilian life as well.