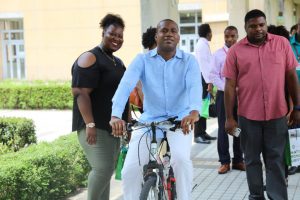 Included in the delegation were Honourable Troy Liburd, Junior Minister of Education for Nevis; William Hodge, Permanent Secretary in the Ministry of Education; Stanley Knight, Permanent Secretary in the Ministry of Youth, Sport and Culture; and Rev. Damien Hughes, Vice Chair of Clarence Fitzroy Bryant College (CFBC) Board of Governors. The group is supported by St. Kitts and Nevis’ Resident Ambassador to Taiwan, Her Excellency Ms. Jasemine E Huggins.

Making remarks at the welcoming ceremony, the president noted that even though the school is 24 years old, it is ranked seventeenth amongst 163 emerging universities. Remarks were also given by Deputy Prime Minister Richards and the Honourable Troy Liburd.

Minister Richards made special mention of Teshanna A Warde, who will be graduating this year. Congratulations were extended to the future graduate.

The University was commended by Minister Richards for its ranking and for playing an instrumental role in the education of nationals from St. Kitts and Nevis. The students were praised for dedication to their studies, embracing the culture, participation in extracurricular activities and for being outstanding ambassadors of the twin-island Federation.

Stephen T. Richards, who brought remarks on behalf of the students, praised the university for making them feel welcome and for its academic programmes. Stephen highlighted a number of awards won by the students from St. Kitts and Nevis, and various activities in which they have been involved.

Jamella Fraser was singled out for top performance within her school of study. All students present were also given an opportunity to speak about their experiences in Taiwan. Deputy Prime Minister Richards reported that the feedback was all positive.

During this visit, the president informed the deputy prime minister and his delegation that there are scholarships available for those wishing to advance their education.

The welcome ceremony was followed by an exchange of gifts and a tour of the campus.

Currently, there are ten students studying at the university with the majority studying computer science and information engineering. The school has a student population of 10,154 students and is situated in Hualien.