Digicel-endorsed ‘Shades of Pink’ was… Extraordinary

Basseterre, St. Kitts (September 23, 2013) – National Heroes Day was truly an Extraordinary Day for scores of patrons who were decked in pink and attended the 2nd annual ‘Shades of Pink’ Fundraiser held on Monday, September 16, 2013. 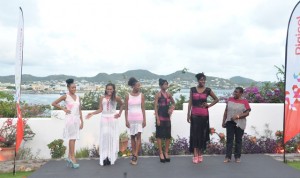 With the unwavering support of Digicel St Kitts & Nevis Limited, the Reach for Recovery Breast Cancer Support Group celebrated the Cancer Heroes at the picturesque Palm Court Gardens in Fortlands on this sunny afternoon of a public holiday. Ushered by the sounds of the 4Play Band, supporters steadily streamed into the venue, most of whom unapologetically wore the theme colours of pink & white.

Digicel St. Kitts & Nevis Limited stands ready to support many charitable organizations in the fight against Cancer. The Reach for Recovery Support Group is noteworthy for raising funds for women at risk who are unable to afford mammograms. The President for Reach for Recovery, Ms Agnes Farrell and the Shades of Pink Committee Members who were kept quite busy in ensuring that all guests were being fed and entertained, are also keen to provide counselling for women currently battling this dreadful disease and group therapy sessions for those whom have beaten cancer.

Making several appearances during the afternoon were the Shades of Pink (SOP) Models and a cultural presentation by a Mucko Jumbie. By sundown, the atmosphere seamlessly transformed into a Carnival as Senior Calypso King, Konris Maynard has the crowd on their feet throughout his entire performance and was called back to the stage for an encore performance of “Sunday J’ouvert.”

The Emcees for the outdoor event were Digicel’s Marketing Manager, Marsha Chatterjee & Digicel Ambassador and reigning Miss Digicel Haynes-Smith Caribbean Talented Teen, Junika Berry. The energetic duo were thankful to have been a part of the Charity event and engaged those in attendance to enter the raffle and spot prizes for free Digicel credit, golf umbrellas and the popular Digicel DL600 Smartphone with free 4G Data service.

Noted to be in attendance at this year’s ‘Shades of Pink’ were the Right Honourable Dr. Denzil Douglas, Hon. Marcella Liburd, the Commissioner of Police, Celvin ‘CG’ Walwyn, members of the public and private sector and representatives of the Embassy of the Republic of China Taiwan. The curtains of the Digicel-endorsed ‘Shades of Pink’ event were drawn on the rhythmic sounds of the Royalties Band.