Dr. Cort Responds To Utterances On The Issue Of Crime 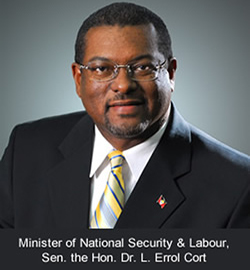 Dr. Cort said, “One crime is too many and it’s up to all of us as a community to come together and address this issue. Government alone can’t solve the problem. Our churches must be involved. Community groups must be involved. And, yes, families must be involved. While one crime is too many and we must work to reduce crime, it’s important for all Antiguans & Barbudans to remember that during the last four years under the ALP, there were a total of 12,314 crimes committed and during the last four years under the UPP, there were 9,828 crimes committed. Anyone who believes that the ALP can best fight crime is fooling themselves. It was the ALP Administration that said “the police is not a priority” and, by extension, so is crime. That being said, we are taking action. We just announced that CCTV cameras are being installed in Antigua & Barbuda. We have increased salaries for police officers and provided additional training. And, we’ve provided more equipment for our police officers, including a state-of-the-art 911 emergency system and a radio communications network. We pledge to continue to do more but, all Antiguans and Barbudans need to critically address the issue whether the ALP is the right party to address the matter of crime.”

Dr. Cort went on to address another young person who spoke on the issue of construction. He said: “We hear you. Increasing the construction sector is incredibly important. That’s why we’re excited to announce that the BEACHES resort will create hundreds of construction jobs. Further, we took action to spur building by reducing mortgage rates to increase home construction and through the construct Antigua & Barbuda initiative. We’ve spent millions on roads and other infrastructure projects. We’ve reduced taxes on building materials to spur this sector as well. We did face the worst global economic crisis since the Great Depression, and, now, this year, our economy is projected to grow at the highest rate in the OECS!”

Dr. Cort invited both of the young people to enter into dialogue with him and the Government so that the issues of concern to them could be discussed in more depth, as they work together to build a better Antigua & Barbuda.

What Is A State Of Emergency?