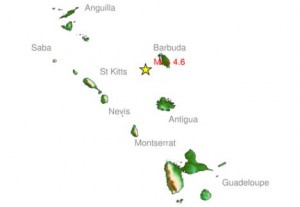 ST JOHN’S, Antigua — On Saturday night, an earthquake with a magnitude of 4.8 was felt in several islands in the northeastern Caribbean, including Antigua and Barbuda, but there were no immediate reports of injury of damage.

The US-based National Earthquake Information Centre said that the quake occurred at 7.50 pm (local time) southwest of Barbuda and had a depth of 20 kilometres.

Residents in Antigua and Barbuda said the tremor lasted more than a minute.

Late last month, Antigua and Barbuda and several other countries in the Leeward Islands were rocked by a quake with a magnitude of 5.1, also with an epicenter close to Barbuda, and Saturday night’s earthquake is the latest in a series of tremors that have been occurring in several Caribbean countries in recent months.

Earlier this month, Trinidad and Tobago was shaken by a quake with a magnitude of 3.7 as officials warned residents of the oil rich twin-island republic to be prepared for a major earthquake.