Basseterre, St. Kitts, Wednesday 11th April– The protest action to boycott the Budget Session on Tuesday 9th April, 2013, by the coalition of parliamentarians who represent the majority of elected members of the National Assembly in St. Kitts and Nevis has left the outgoing Prime Minister, Dr. Denzil Douglas and his minority government, shocked and confused about their next move, as they try to come to grips with the fact that their reign of mismanagement and political abuse in government, is fast approaching its final days. 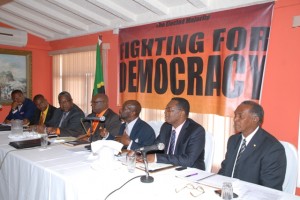 Some sources that are close to the Douglas regime have admitted that Dr. Douglas and his illegitimate administration were left dispirited and angry when they looked across the aisle and saw no one on the opposition benches.

But reports are now emerging that the leadership of the government was mostly annoyed over the fact that the opposition members of the People’s Action Movement, (PAM), the Concerned Citizens Movement, (CCM) and the two former Labour Party Cabinet members, were able to pull off a media coup, dominating the press coverage of the day, with members of the public refusing to listen to the Budget Presentation and instead focusing on the live press conference of the opposition. Top executives of the Labour Party have also expressed concern that so much attention was paid to the press conference while few bothered to tune in to the Government’s Budget presentation.

Scores of listeners were observed on Tuesday catching every word of the presentations being made by the “Elected Majority”, comprised of Mark Brantley, Shawn Richards, Sam Condor, Dr. Timothy Harris, Vance Amory and Eugene Hamilton. They were joined by their colleague Senator Vincent Byron. The media event, which was held at the Ocean Terrace Inn, was hosted at the very same time (10:00am), as the debate in parliament, thereby reducing the number of persons who listened to the Prime Minister. The press conference was carried live on three radio stations in St. Kitts and Nevis and was rebroadcast by at least one station, due to the popular demand of its listeners.

The shift in attention, away from the government, to the opposition, is already showing early signs that perhaps the concept and need for a unity government is indeed the best solution to moving the country forward. This is a worrying situation for the Prime Minister and the Government, who have been making a weak attempt to fight back against the powerful message that the People’s Action Movement, (PAM), and others in opposition, have been making that the country has lost confidence in the government and a Prime Minister who continues on a daily basis to embarrass himself, the people and the nation in general.

One thing that became clear from Tuesday media appearance of the six members, the movement to unity is much stronger and organized than many in the public had previously realized. It was also the very first public appearance of all six members and the senator from the opposition benches.