Despite a prolonged session playing in persistent rain, the umpires eventually were forced to call off the second division fixture between Police and Empire as the rain intensified.

The match was played on Tuesday 16th April at the ET Willet Park in front of a sizeable and vociferous crowd. The lawmen without a doubt had a full supply of cheer leaders. 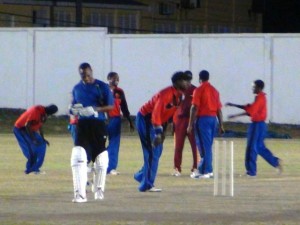 Empire won the toss and batted first and scored freely to accumulate a comfortable 160 for 4 from their allotted 20 overs with Junior DUNCAN Mills and the youthful and exciting Kezron Archibald taking a toll of the bowling.

When the Police team batted there were some moments that brought real excitement to their ranks, as they struck a few lusty blows but they generally struggled as the downpour increased. When the game was called off with 12.4 overs bowled, they were behind the eight ball on 56 for 5. Comparatively, the Empire men had scored 86 up to the same point of their innings and were awarded the match.