BASSETERRE, ST. KITTS, March 21, 2018 (PLP PR Media Inc.) — Prime Minister Dr the Hon Timothy Harris says his government is actively engaged in the constructive engagement of senior citizens, and is heartened by the contribution of the Federation’s Honorary Consul in Ontario, Canada, Dr Winston Isaac who has introduced to the country the expertise of a geriatric practitioner.

Dr Isaac, who left the Federation on Saturday March 17 after a one-week visit, was accompanied by Dr Samir Sinha who is the Director of Geriatrics at the Mount Sinai and the University Health Network Hospitals in Toronto, and also the Government of Ontario’s Lead for Seniors.

“The reason that I got Dr Sinha down here is to help and promote the care of the elderly. It is his interest area,” explained Dr Isaac. “It is a growing area of interest and I thought St. Kitts and Nevis can do with his expertise. He kindly consented to come down with me on his own – this is not costing the Government of St. Kitts and Nevis any money. I have a house here, so he is staying at my place.” 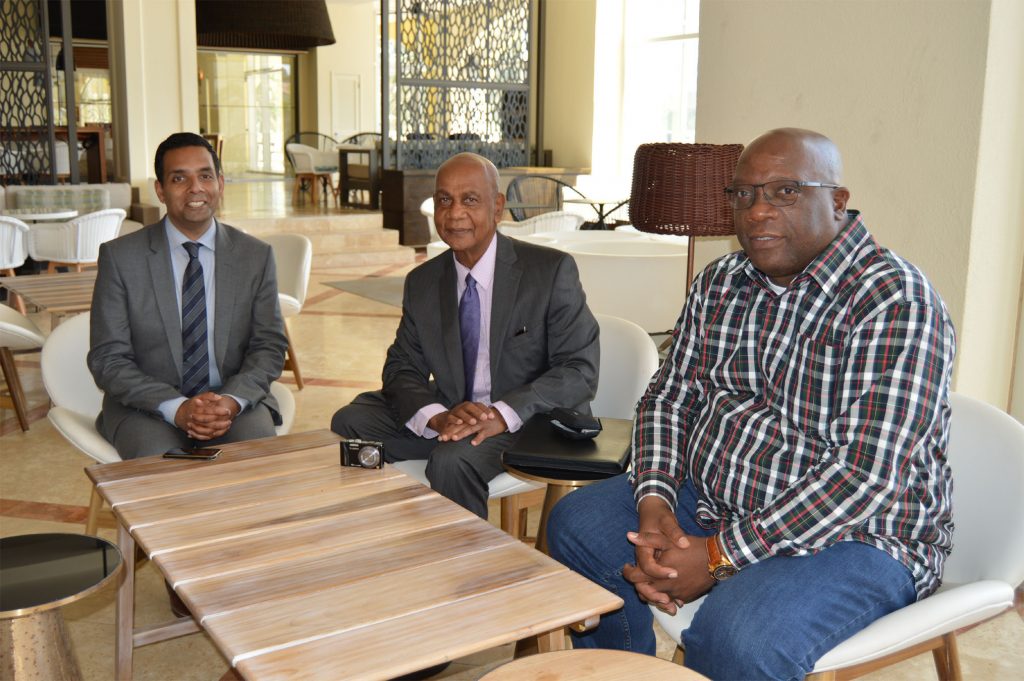 On the final day before returning to Canada the two met and briefed Prime Minister Harris who later told this media: “Dr Isaac exemplifies what we are attempting to do with our diasporic community – to see them as a critical asset in our programme for nation building. In that regard we want more persons to follow that and to bring their talents, their experiences, their networks out there in helping us address areas of need in the country.”

Dr Winston Isaac, who has held the position of Honorary Consul, at the Federation of St. Kitts and Nevis Consulate in Toronto, Ontario, for the last 16 months, is an academic, a health service manager, a professor of Health Services Management, and a Health Policy Analyst, while Dr Samir Sinha is a geriatrician, specialising in the care of older persons, and both are interested in healthcare.

They had a packed programme in the week they were in St. Kitts, and had appointments with among others Health Minister the Hon Wendy Phipps, the Chief Medical Officer Dr Hazel Laws, and the Acting Permanent Secretary in the Ministry of Social Services Mrs Janelle Lewis. Dr Sinha also held a public lecture at the University Centre, UWI Open Campus, for general public, and had meetings with physicians, healthcare workers, and healthcare nurses. They met Prime Minister Harris on the last day of their visit.

“The Prime Minister is very ecstatic about having this opportunity and having me provide a good contact to St. Kitts and Nevis in the area of geriatrics and in the care of the aging population,” said Dr Isaac. “The Prime Minister is aware that this is an important aspect that needs attention, and should be supported.”

He concluded by saying, “I would say that I feel very positive that Prime Minister is glad that I took this initiative to bring Dr Sinha to St. Kitts and that his expertise could be tapped into.”