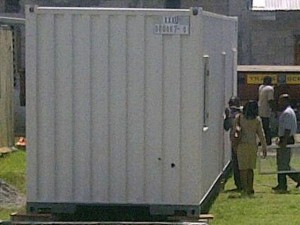 The call came on Thursday night (June 20) during the popular radio call-in show,”Tell Me” aired on Choice Community Radio 105.3 FM from 8 to 10. The call follows closely on the heels of the Concerned Citizens Movement (CCM)-led Nevis Island Administration’s announcement that the Dialysis Unit purchased by the NRP Adminstration would not be brought into operation in 2013, or in the foreseeable future.

This, while it has been reported that at least two persons in need of dialysis care had died since the unit arrived on island in April, and at least four Nevisians are overseas, one as far away as Guyana in South America, seeking dialysis treatment.

The surprise announcement by Permanent Secretary in Health, Mrs. Nicole Slack-Liburd was made Wednesday at a NIA-sponsored press conference held at the St. Paul’s Anglican Church Annex.

Calling Brantley a talker not a worker, Daniel said, “Minister of Health, Mark Brantley has displayed sheer incompetence in dealing with the dialysis unit and other health matters. It is a shame that the hard work of the Medical University of the Americas (MUA), the Nevis Renal Society and the Nevis Reformation Party led- Nevis Island Administration has been belittled by the Minister of Health Brantley by stating that I (Hensley Daniel) former Minister of Health, just woke up one morning and decided to get a Dialysis Unit in Nevis as a political gimmick.”

Let me say that I, Hensley Daniel, was president of the Nevis Renal Society since conception, and I have always cared about kidney failure patients, and the health care of Nevisians before I even entered the political arena,” said Mr. Daniel.

After Daniel made the call for the resignation of Brantley as Minister of Health, a number of callers echoed the same sentiments.

Mr. Daniel also registered his deep disappointment, a view shared by several media persons in attendance at the Press Conference, on the absence of the Hon. Mark Brantley at the first Press Conference to discuss the way forward for the Dialysis Unit here on Nevis.

“It is very sad that a man who had so much to say during the past six and a half years of the previous administration would be absent from the first Budget Address in the House of Assembly of his CCM- led Administration, the launch of Culturama which comes under his portfolio as Minister of Culture, and more recently absent from the Press Conference discussing the EC$600,000 Nevis Dialysis Unit,” commented Daniel.

On an earlier radio program “Breakfast Menu” with Chef Walty (Walter Morton), aired on Choice Radio on Thursday morning, special guest, Dr. Glenville Liburd, who has worked and observed many Dialysis Units across the Caribbean and further afield, stated that islands with similar demographics, population and economic status, including Anguilla, Antigua and Dominica all have the dialysis machines. Liburd seemed very upset that Nevis would have to miss out on having its own unit because of the government’s cry of lack of money or trained nurses.

“Operating and maintaining the machine is not rocket science, and we here on Nevis and throughout the diaspora have people that are capable of training and pledging funds to put the unit in full gear,” stated Dr. Liburd.

According to Dr. Liburd the unit is a brand new unit which should be set up immediately, so that Nevisians do not have to continue to spend excess money to go overseas to receive treatment.

“There was a dialysis machine that was used in Nevis by Mr. Dinzey Morton and his wife, Mrs. Marjorie Morton, for over six years at their home where Mrs. Morton administered her husband on the machine and kept the machine clean,” said Liburd.

Following Dr. Liburd’s call for the unit to be pressed into service, a number of pledges came in via telephone and text, all stating that they wish to donate to the maintenance of the machine. The pledges began with well-known businessman Mr. Rawlinson Issac with a pledge of $500 per month. The donations continued to pour in as Andrea Bussue, a special education officer, gave a pledge of $100 a month, and former Premier of Nevis, the Hon. Joseph Parry pledged an undisclosed amount every month to the use of the Dialysis Unit.

“Again, the running of the dialysis machine is not rocket science! Once there are trained persons and sufficient supplies available, the unit can run and human life can be prolonged,” concluded Dr. Liburd.