ST GEORGE’S, Grenada — Former Grenada prime minister, Tillman Thomas, says the people of Grenada have given him hope: “Hope that there are other people in our political party who understand that the justification for their existence is for them to act and fight for the good of the citizens of the country.” 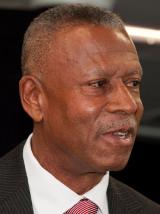 In a recent interview with Caribbean News Now contributor Helen Grenade, Thomas spoke eloquently and passionately about his concerns for his political party, his constituents, and some pressing issues for Grenada and himself personally.

“I am proud to be the NDC leader and politician and proud to demonstrate it. The NDC politicians will sit down together and discuss Grenadians needs and concerns. We in the NDC, we as a community feel the power of our ethical choices to elect decent and responsible people to represent our communities.”

The former prime minister said he wants Grenadians to be aware of the politics of the NNP, which defeated his incumbent NDC government 15-0, including Thomas losing his own seat in elections on February 19.

“Not because the NNP won a majority, that is not an indication that they are on the right track, we respect the democratic process and we respect the majority in the country. But, at the same time, that doesn’t mean it is right,” Thomas said.

He continued, “Grenadians should not surrender our values and our morality to the NNP brand of politics. It is not the healthiest thing for Grenada. I maintain this and I’m very strong on this.”

He said, “For now, the plan of the NDC is to regroup, to increase the membership, to sensitize our people as to the importance of politics, and to build a ‘strong’ party political organization.”

The party’s role, he added, is also to show the right way and let people know that respect for institution is important.

“We cannot just be doing things for political expediency; we need to promote people based on merit, not on politics and loyalty and that is what the NNP is all about,” the former prime minister said.

Those who are eager to know the varied and subtle character of the man will find in them another, not inconsiderable reward. No leader in this period of the Grenadian enlightenment is as articulate, as wise, and as conscious of the implications and consequences of free society as he.

To Thomas, therefore, we must go for fresh contacts with the commanding personalities and events of today, and for the fullest expression of government through reason, through law and through energetic and progressive change.

Thomas has recovered his equilibrium and is ready to get back to work with his NDC political party. The attitude he has — and I couldn’t ask for a better one — is as positive as they come, and that in and of itself is a character quality you don’t see in a lot of politicians.

Thomas said, “We’re going to have to work harder everyday if we are to overcome adversity and be the leaders that the people expect us to be. We have gotten the message that if we don’t start performing better, we will continue to go down. There is no going down anymore.

“We have to regroup, refocus our priorities and come back better and stronger than ever. We definitely need to shake things up. Improving our team is our main goal and focus. We want to send a message, that the NDC is alive.”

Thomas argued that minority group support is underestimated in an election, and that was certainly true when the former prime minister ran for re-election and lost at the polls.

The mere fact that he had strong early support from Grenadians was remarkable. But the people were looking beyond past transgressions to find a candidate who matched their level of concerns. But moral cynicism was profoundly repugnant to the people of Grenada. Conscience and conviction enlightened their verdict at the polls and they elected the NNP to form the new government.

“We are working to identify the best ways to continue our role of strengthening the National Democratic Congress political party and the Grenadian people. The future is at the centre of our agenda for our party,” Thomas said.

The former prime minister is an outspoken, highly educated man, who is eager publicly to promote his strong opinions, especially about the way the NDC is rallying the country.

“If our NDC political leaders have nothing to say about the most important issues in our lives, and the lives of our people, then we become irrelevant. Our goal is to help nurture those who need it, and at the same time, I am inspired by the underlying sense of pride in our communities,” he said.

The former prime minister has always been open and positively predisposed to the Grenadian community, which in turn is growing and developing a new maturity and high level of involvement in many key areas of national life, economic, cultural and political.

“My goal and inspiration is to strengthen my activities with my political party and people,” he said.

Thomas has a deep appreciation for the people of Grenada and he views them as a brave. He is not a bystander but a saviour. His efforts on behalf of Grenadians are far greater than most Grenadian politicians.

“The challenge for us is to realize our limitless potential, not as an entitlement but as an opportunity. We have the potential to be equals, how that potential is realized is up to us,” Thomas said.

Here’s how he responded to specific questions:

Q. When did you get involved in politics?

Q. After working as a lawyer, what made you decide to get into politics and how did you make that transition?

A. I did not have to make a transition from lawyer to politician. When I became prime minister, my focus was fully governance and politics, but I always see myself as a citizen of Grenada, making a positive contribution on both the political and legal fronts.

Q. What was the basic platform that you ran on in the last general election? What changes were you going to make, if you were re-elected?

A. Our basic platform in the last general election was to establish a good economic foundation by focusing on what we referred to as the transformational pillars of the economy, namely: (a) education, health and wellness; (b) tourism and hospitality services; (c) agriculture and agri-business; (d) information communication technology; and (e) renewable energy. The continuation of the good governance agenda was also part of our platform. And if we were elected we were going to put a heavier emphasis on project implementation. We had mobilized funding for several projects, including the rebuilding of parliament and flood mitigation project in St Mark’s and we would have liked to have oversight of those projects.

Q. As St Patrick’s has a large NDC demographic, what specific issues are on the agenda that affect your community?

A. Like most constituencies, the issue of unemployment affected St Patrick’s. However, we were able to establish community access points to make internet services access available to St Patrick’s and other rural communities. We were also able to introduce video conferencing to TAMCC St Patrick’s.

Q. What have your previous positions, such as lawyer and politician, taught you about what people need and how to help them?

A. People have potential, they have talents and as leaders we have to help in creating the environment where their potential and talent could be harnessed and bring about a better quality of life.

Q. What were you going to bring to the political arena that another candidate couldn’t?

A. I cannot speak for other candidates, but the record would show that I brought a high level of respect for institutions as evidenced by the appointment of Commissioner of Police William Thompson. He was appointed after an interview was conducted by a panel set up by the public service commission. That was a first in the last 20 years in Grenada. I did not and will never tolerate corruption of any kind.

Q. Do you believe you were an effective leader?

Q. How has your leadership style changed over time?

A. Fundamentally my leadership style has not changed. I may be more flexible on certain issues today than I was previously. I have always been very organized and disciplined, and I’ve always been highly curious and worked harder than most people. I have this strong fire and this drives my vision, because I care a lot about people.

Q. What behaviour do you have a particularly low tolerance for?

A. Corruption, I resent people using public office for private gains. I don’t expect people to be Tinkerbell, but when people have that dark cloak, that just drives me crazy. People should be direct and say how they feel.

Q. What kind of recognition means the most to you?

A. A person should be recognized for his or her strength of character.

Q. The NDC politicians have struggled with internal divisions for the past few years. What caused the dissention?

A. No there was no dissention. There was a struggle for power. There were those who came into NDC with an agenda to take over the leadership and, when that did not materialize, they started to undermine and destabilize the party and government.

Q. After losing the general election, how are you coping?

A. I am coping well. As a patriotic Grenadian, I will continue to make my contributions. I am not defined by any position of office.

Q. If you had one message to get out there, what would it be?

A. Get involved. Be informed. Speak up. Know what’s happening in your community so you could be in a position to make wise decisions.