From the Basement ….To the Attic: PEP’s Women In Construction Trades are ready

Basseterre, St. Kitts (May 28, 2013) — It was a colourful start Friday, May 24, when members of Women in Construction Trades (WICT), a sub-project of the People Employment Programme (PEP), held the first in a series of seminars aimed at educating the general public on what women can do in professions viewed as male domains. 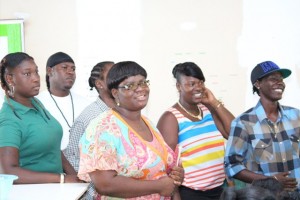 The twenty-four women, who are currently training at two sites, met under one roof last Friday at All Solutions International in CAP Southwell Industrial Park where they invited guests from state corporations that would in future need their services. Three of the trainees, Ms Isis Richards, Ms Nicole Estridge, and Ms Tamara Richards gave their experiences.

Project Coordinator for Women in Construction Trades (WICT), Mrs Celia Christopher, while welcoming the invited guests, informed them that the seminars are entitled ‘From the Basement to the Attic’ and that they will be focused on showcasing success stories of Kittitians and Nevisians in various trade related vocations.

“Women in Construction Trades is a programme which seeks to increase employment opportunities for women in male dominated fields, who often due to the demands of their primary roles as caregivers, are unable to develop the skills required to engage in meaningful income earning capacities,” observed Mrs Christopher.

She said that by giving women a skill, the People Employment Programme (PEP) was empowering the women to not only survive in this environment, but also to make a greater contribution to productive socio-economic development of the entire country.

“To date we have a total of 24 trainees in Women in Construction Trades, 18 of them at All Solutions, focusing on building and construction with a specialisation in dry wall, tilling, painting and decorating and concrete polishing as well as drafting and CAD systems,” said Mrs Christopher. “Another five women are doing electrical and electronic maintenance at the Newtown Community Centre, while one woman is doing building and construction specialising in concrete and steel fixing.”

Facilitator of Women in Construction Trades at All Solutions, Mr Walcott Hillocks, reported that the women trainees in construction were mastering all the different facets of the trade. He noted that it was very encouraging, all because the People Employment Programme had given them the chance to train.

“We are here to hold our candle for all the participants not only in the women in construction, but all the other programmes that are broken out by the People Employment Programme to encourage all the people,” commented Mr Hillocks. “The opportunity that is being provided to you must not be taken lightly. Let us take the proverbial bull by the horn and ride it. There is an opportunity here for women, for men, for everybody to get an education.

“At All Solutions, with the help of everybody, we are going to insist that the programme is a success and that is why we have taken this move to introduce you to a series of lectures simply called, From the Basement to the Attic.”

Mr Hillocks told the women in training that as they get out of the basement, they would have to learn what their responsibilities are, because sometimes people think that they have rights, but they do not realise that there are responsibilities that come with those rights.

People Employment Programme’s Project Manager, Mr Geoffrey Hanley, who also addressed the seminar, said he was extremely pleased that PEP’s objectives are being met systematically, adding that over time they will be able to achieve all of them. He noted that the programme which was meant to cater for 1,000 persons had grown and now has 1,898 persons registered.

“To the women in the construction trade, I know you are in for a good deal,” said Mr Hanley. “I have visited, and I have spoken to Mr Hillocks on numerous occasions and the plan that he has for you. At the end of your tenure here, I am quite convinced and confident that as some of you would have stated that you want to be the number one tiller in St. Kitts, or the number one roof person in St. Kitts.

“You would have been afforded the opportunity to be in those skills, so now this is your chance to make sure that you move from the basement and start climbing those steps to take you to the attic.”

Renowned businessman Mr Alphonso Barker was the guest speaker, while among the invited guests were those from the Department of Labour, led by Mr Spencer Amory, Social Security, led by Ms Rubie Taylor, and Solid Waste Management.