There was an air of eager anticipation and excitement at the Flats in Cole Hill on Tuesday 4th March as B division champions at last year’s Inter Primary athletics meet, the Elizabeth Pemberton Primary School, hosted its annual sports meet. 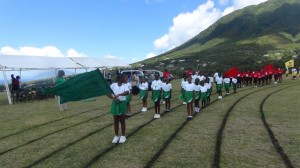 There was a huge crowd in attendance and this reflected the support from quite a number of the other Primary Schools on the island and the wider general public.
The meet was held under the distinguished patronage of former super athlete at the school, Ms Jessie Browne.

The athletes competed in the 60; 100; 200; 400; 800 and 1200 meters, along with the 4X100 and 4X400 meters relay events.
To add to the fun and entertainment, sack races; lime and spoon; fill the bucket and other fun races, were also thrown into the mix.
The scouts were also out and close attention was paid to those athletes who will obviously be in action, come the mini Olympics of 2014.
When the points were tabulated, it was the Gold house team that was celebrating with the winner’s trophy.