The Charlestown Preschool held its annual sports day at the ET Willet Park on Wednesday 27th March. It was a brave decision by Headmistress Brenda Williams, because during the course of the morning, it rained cats and dogs and the original thought process was that the meet should be called off. However, later in the morning, the sun came out in all of its glory and even though there were several wet patches at the ETW, it was confirmed that the general area was safe for the children to have their day in the sun. 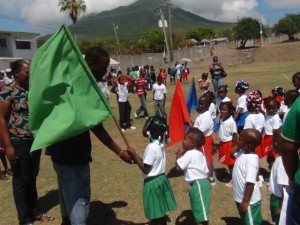 The meet was held under the distinguished patronage of Mr. Paiera Skeete who interestingly enough was one of the students in the first batch to attend the school when it opened its doors 30 years ago, in 1983. Even more interesting, is the fact that 30 years later, he now has a daughter attending the school.

The children marched impressively during the mach past which got underway sometime around 2pm and then the thrilled the sizeable crowd in races such as socks and shoes; dress up races; flat races; fill the bottle; tyre races; bunny hop and much more.

At the end of the day, when the points were tallied, these were the results:
Green house –champions-213 points
Blue house—184
Red house-a close 181 points

Windies looking to shrug off T20 rust against Bangladesh

Netball Is Back at The Main Stadium.