St.Kitts-Nevis Minister of Health the Hon. Wendy Coleen Phipps has been named Chairperson of the CARPHA Executive Board. Minister Phipps will be the first female to head the Board of one of the region’s most important and significant institutions in the 2011 established CARPHA. 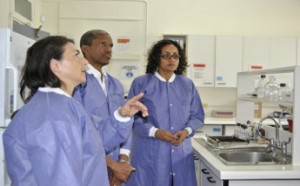 Jamaica’s Minister of Health Dr. Fenton Ferguson and Monsterrat’s Colin Riley has served in the position before.

CARICOM Heads of Government approved the establishment of CARPHA Caribbean Public Health Aegncy, as the new public health agency in March 2010. CARPHA’s purpose is to integrate the functions of the five Regional Health Institutions and build on public health knowledge and expertise across the Caribbean, preventing duplication of effort and resources. This will facilitate a co-ordinated approach to public health issues including managing the risk of disease outbreaks in the Region.

The CARPHA Executive Board has responsibility for charting the directions of CARPHA by approving its strategic plan, appointments to staff positions and the technical advisory committees; by devising mechanisms for the prompt exchange of information among its members and between the Board and the various stakeholders; by promoting cooperation in education and public awareness; by supervising the mobilization and disbursement of resources and all other fiduciary matters related to accountability and good governance.