Hurricane Irma Leaves St. Kitts and Nevis with an Initial $ 53.2 Million in Damages

Basseterre, St. Kitts, September 15, 2017 (SKNIS): Hurricane Irma left a trail of destruction in its wake in the Caribbean. While the damages in St. Kitts and Nevis were minor compared to other islands that were almost completely devastated, the twin island federation is in recuperation from the damages it suffered.

During a press conference on September 14 to update the country on post Hurricane Irma recovery efforts, the Prime Minister, Dr. the Honourable Timothy Harris, gave an assessment of the damages left by the category 5 hurricane.

“The estimate of damage to St Kitts and Nevis has been conservatively put at EC $53.2 million,” he revealed. “The Nevis Island Administration (NIA) estimates the damage on that island at approximately EC $12 million. On the island of St. Kitts, our estimate is EC $41 million. This estimate reflects damage mostly to the public sector. We are still awaiting the reports from the private sector.”

In terms of housing stock, the prime minister said that damages range from minor (loss of shingles) to significant damage, that is, the structure cannot be safely occupied without substantial repairs.

“The National Housing Corporation (NHC) reported a number of homes across St Kitts were affected. The largest numbers are in NEMA districts 3, 6, 7,” he said.

An assessment of agriculture and marine shows that damages include loss of green houses, fruit trees, animal feed, crop fencing, pig pens, equipment and hundreds of animals whose deaths were attributed to Hurricane Irma, said the prime minister. He added that there was also significant damage to feeder roads. Also experiencing substantial damages were the Department of Marine Resources mainly at the Fisheries Cooperative Building in Dieppe Bay and the break water facility in Old Road. 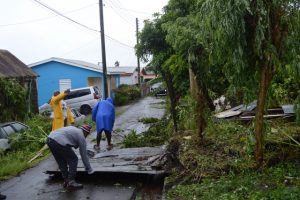 The prime minister said that the preliminary damage assessment report for St. Kitts was prepared by Mr. Cromwell Williams, Director of Public Works/Chairman of the Damage Assessment and Recovery Committee (DARC) of NEMA. The preliminary damage assessment report for Nevis was prepared by Mr. Brian Dyer, Disaster Manager at the Nevis Disaster Management Department in the Premier’s Ministry.
“The estimate of damages to Latin America and the Caribbean attributed to Hurricane Irma is put at US $10 billion dollars,” said the prime minister. “Thirty-seven lives are reported lost to date as a result of Hurricane Irma. St Kitts and Nevis was spared a direct hit and consequential loss of lives. For this we are most thankful to God for his divine providence. While we fared better than most, we are not without our share of difficulties.”

Some of the Caribbean countries severely affected were Barbuda where all of its residents were evacuated; Saint Martin/ St. Maarten, which received substantial damage to key infrastructure including its hospital and airport and the Overseas British Territories of Anguilla and the British Virgin Islands, which also received extensive damage requiring outside humanitarian aid.