Charlestown, Nevis – The Nevis Cultural Complex was filled to capacity on the evening of Saturday 26th October for the Miss Seniors Pageant. 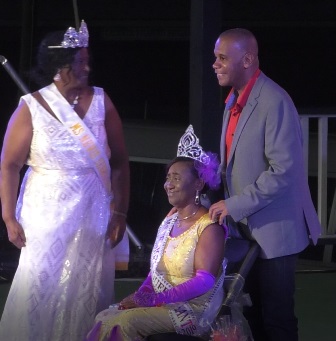 Persons were in general agreement, that the crowd in attendance for the second Miss Seniors’ pageant coordinated by the Social Services Department’s Seniors’ Division, could easily compare with any Culturama event crowd, held at the same venue.

The show commenced somewhere around 6 pm and after the usual preliminaries, the four contestants stormed their way into the hearts of the members of the audience, with a stunning ice breaker.

The contestants were judged in three segments.

Segment one – Sportswear and sports depiction ‘Let’s get active’.

Govanie Butler depicted the game of Cricket and showed how the game was played many years ago, complete with coconut bat and pads made from cardboard.

Jeannette Grell Hull depicted her favoured sport of Netball and came out attired as a Netball umpire and demonstrated many aspects of the game in the process.

Josephine Maynard came out attired as an athlete and showed that at 84, she was still very active and actually ‘won’ a gold medal.

Idella Wallace, following in the footsteps of her renowned sons, who are highly noted for their Football skills, came out as a Footballer, complete with Football gear and demonstrated some skill level and even scored a goal.

Segment two -Talent – ‘Show me what you can do’:

Govanie Butler depicted a saleswoman plying her trade in the heart of Charlestown.

Jeannette Grell Hull used her lovely voice to woo the audience with the well-known OLDIE-GOLDIE-‘I can’t stop loving you’.

Josephine Maynard totally rocked the crowd with a cultural dance, during which she made some moves that had persons questioning her announced age.

Idella Wallace did a well-received dramatic presentation, on the issue of obesity and its dangers to health.

All four ladies thrilled the audience with their dazzling evening apparel and everybody knew that the judges would have some head-scratching to do.

Interspersed with the acts from the Golden girls, were renditions from the Seniors steel band; The Rhythms Pan Orchestra from Hanley’s Road, on debut; a hat parade by the seniors; introduction of the TDC Miss Gingerette contestants (show slated for 1st December at 7.30 pm); introduction of Miss Gingerama contestants (show slated for 30th November at 7 pm) and beautiful renditions from the house band, Eclectic band.

The first Miss Seniors’ pageant Queen, Miss Mareta Hobson, also made her final appearance.  The four contestants were then presented with a rose each, a gift basket, a participation trophy, and a sash.

The show was ably chaired by Hon. Eric Evelyn and Miss Sheilagh James.