(BASSETERRE, ST. KITTS) – An application was filed by members of the Opposition on Wednesday, April 3, 2013 in the High Court in St. Kitts seeking yet another injunction. The case is scheduled to be heard today Friday, April 05, 2013 at 2: 00 p.m. 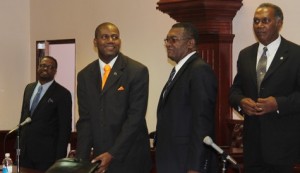 The application for the injunction is to restrict the Speaker of the House and Parliament from scheduling any business of the National Assembly, including the Budget, before the Motion of No Confidence is debated.

The Opposition is seeking to prevent the tabling of the No Confidence Motion which has been filed since December 11, 2012. The injunction was filed under Section 52 (6) of the Constitution and it states that if a vote of no confidence is debated and successfully passed the Prime Minister shall resign within three days or dissolve parliament.

It is suspected that the Prime Minister may be contemplating boundary changes not too long after the Budget Session in Parliament and therefore the move to obtain an injunction may be geared at thwarting that so as to prevent boundary changes and any other legislative matter from gaining priority over the Motion of No Confidence.

Individual Arrested and Charged for Rape