Jamaican ambassador laments high rate of Jamaicans deported by US

“Far too many Jamaicans are stepping on to the deportation train. Each month about 75 Jamaicans are sent home for indulging in unlawful activities,” Vascianne pointed out. 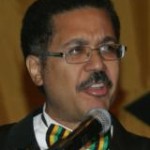 Jamaica’s ambassador to the US, Stephen Vascianne, delivers the keynote address at the Jamaica Independence Celebration Foundation Independence Ball to mark Jamaica’s 51st year of independence in New York on August 17, 2013
The Jamaican envoy to Washington, told the over 800 Jamaicans and friends of Jamaica who attended the Jamaica Independence Celebration Foundation (JICF), Jamaica 51 Independence Ball in Manhattan, NY, on Saturday that “Jamaica believes that there are some problem with the deportation system as in certain instances, persons are sent to Jamaica when in fact they have no earthly ties to the country. They may have come to the United States as children, live their lives there and now they are required to fend for themselves in unfamiliar territory.”

Vascianne argued that the deportation system may actually be counter-productive to both Jamaica and the United States because it sets in place a loop for criminality. He pointed out that persons are sent back to Jamaica with no means of economic survival and so they become more entrenched in criminality, which creates instability at home and they sometime export their criminality back to the United States.

Vascianne said it was his hope that the United States will continue to give thought to more humane and sympathetic consideration for persons who are directed to the deportation train when they commit minor offenses.

The ambassador urged Jamaicans in the Diaspora to guide those Jamaicans inclined to stray from the straight and narrow to live and work within the law.

Vascianne said, as Jamaica marks its 51st anniversary of Independence, “we must redouble our efforts to maintain good relations with the United States of America even as we also ensure that Jamaicans in the Diaspora continue to share their lives and retain their links with family and friends at home.”

In a message read by chairperson of the JICF, Paulette Willoughby, US President Barack Obama praised the Jamaican community for the outstanding contribution it has made to the growth of the United States.

“Since America’s early days, men and women have come to our shores from every corner of the globe bringing their vibrant culture and important historical perspective. By uniting those who trace their roots to Jamaica and celebrating Jamaica’s independence, events like this remind us of our country’s legacy as a nation of immigrants and help ensure the diversity of our people remains one of the greatest strengths,” Obama said.