It was the post fathers’ day Domino tournament and it was organized and coordinated by the Gender Affairs Division of the Social Services Department.
The action commenced on Saturday 22nd June, at the Nepac courtyard.
Chief coordinator, Pastor Wayne Maynard, indicated that some 16 teams registered and most of the preliminary games were hard fought and so despite the fact that the games commenced just after 2 pm, the top four teams were not determined until somewhere around midnight.
The organizers in their wisdom, decided to postpone the grand finals and the play off for third and fourth spots, until Tuesday 25th June. 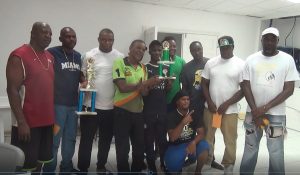 So, the four top teams, showed up at the conference room of the Gender Affairs division, located at the GMBC building on Government Road, on Tuesday night.
In the championship game, Eddy Caines described it as a one sided affair, as his team, K’s Electrical, easily disposed of the Corn Mill Domino team, with a score line of 3 games to 1.
The match up for third and fourth spots however, went the full distance as the Spanish team, eventually endured to win over the Killers team, in a contest that went the full distance.
Pastor Wayne Maynard, at the brief closing ceremony, described the tournament as ‘a resounding success.’
He congratulated all of the participating teams and noted that the losers do not want to feel the sting for too long and are already asking for another tournament.
He thanked his staff, volunteers and sponsors for helping to make the post fathers’ day event, a success.
He then presented the prizes and trophies to the winners as follows:
Champion team- K’s Electrical-$700.00 cash prize; a grand trophy and a dinner for one at Sunshine
2nd place-Corn Mill Domino Club-$300.00 cash prize and a trophy
3rd place –The Spanish team-$180.00 cash and a large pizza at Lime Beach bar