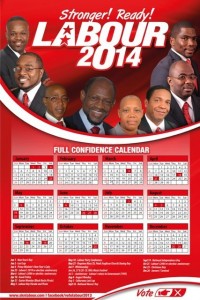 candidates selected by the Labour Party for the next general elections.

May 5 – Labour Day March and Picnic

Calendars are available at Masses House on Church Street and the Labour Party Secretariat, upstairs of Mystique Photo on the corner of Church and Central Streets.