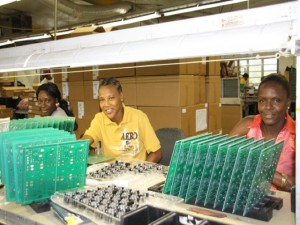 Minister Nisbett, who is also Minister of Foreign Affairs, Homeland Security, Justice and Legal Affairs,  during this week’s sitting of the St. Kitts and Nevis National Assembly, introduced and had read a first time, the Protection of Employment (Amendment) Bill, 2013.

The 16-claause amendment primarily seeks to amend the Protection of Employment Act, Cap. 18.27 in order to make further provisions relating to the protection of employees contract of employment.

Clause 5 of the Bill seeks to introduce ten new Clauses, namely, 5A to 5J, inclusive, in order to make provision relating to unfair dismissal. In that connection, Clause 5A seeks to prohibit an employer from terminating the employment of an employee without a valid and fair reason for such termination, which termination must be connected with the capacity or conduct of the employee, or with the operational requirements of the undertaking, establishment or service, pursuant to the provisions of sections 5C, 5D, 5I or 5J.

Even where the termination is fair and valid the notice requirements in section 7 of the Act must be complied with.

Subsection (2) of Clause 5A specifies what constitutes unfair or unlawful dismissal.   Any dismissal which is based, among others, on grounds like,

(a)        trade union membership or participation in union activities outside working hours or, with the consent of the employer, during working hours;

(b)        seeking office as, or acting or having acted in the capacity of, a workers’ representative;

(c)        making a complaint or participating in proceedings against the employer involving alleged violation of any law or regulation or having recourse to competent administrative authorities;

(d)       participation or proposed participation in industrial action including a strike, which takes place in conformity with the provisions of this Act or any other labour relations law;

would constitute unfair or unlawful dismissal.

In the spirit of Clause 5A, Clause 5B of the Bill, which speaks to constructive dismissal, seeks to make provision relating to the circumstances under which an employee may terminate his or her employment contract without notice or with less notice than that to which the employer is entitled by any statutory provision or contractual term, where the employer’s conduct has made it unreasonable to expect the employee to continue the employment contract.  In that case, the employee shall be deemed to have been unfairly dismissed by the employer for the purposes of the Act.

Clause 5C seeks to require an employer to give an employee who is on probation or on a short term contract a twenty – four hours notice where the employer terminates the contract of the employee for a valid and fair reason.

Clause 5D seeks to make provision requiring an employer to give an employee notice of termination of employment where the termination is for a valid and fair reason which is connected with the capacity or conduct of the employee, or the operational requirements of the undertaking, establishment or service.

§  respecting the employee’s right to give notice of termination of employment, and the circumstances under which the notice has to be given;

§  requiring an employer to inform the Commissioner well in advance of any intended multiple terminations of employees for reasons of redundancy;

§  setting out the procedure for retiring employees who are entitled to age benefit under the Social Security Act;

§  respecting termination of employment for repeated misconduct, breach of contract or unsatisfactory performance.

Clause 6 of the Bill seeks to amend section 6 of the Act in order to provide for the rights of employees where there occurs a change in the ownership of the business.

Clause 7 of the Bill seeks to amend the Act by inserting in a new section 6A in order to provide for the protection of the benefits or entitlements of employees where the employer’s business is wound up.

Clauses 8 and 9 of the Bill seek to amend sections 7 and 8 of the Act, respectively, in order make the provisions of those sections to be in harmony with the new provisions relating to unfair dismissal.

Clause 10 of the Bill seeks to introduce a new section 8A into the Act so that an employee who is given notice of termination of employment is granted reasonable time off, with pay, to seek alternative employment, if the employee so requests.

Clause 11 of the Bill seeks to make provision to the effect that temporary cessation of as defined in that section is not to constitute a break in the employee’s continuity of employment.

Clause 12 of the Bill seeks to replace section 11 with a new section that makes provision respecting the manner in which appeals may be made against unfair dismissal.

§  recovery of wages and notice pay;

Clause 15 seeks to introduce two new sections into the Act in order to provide for long service gratuity and service charge.

Clause 16 seeks to introduce a new Part IVA in order to make provision for the establishment of a National Tripartite Committee on Labour Standards, and to provide for its functions and related matters.