Lara a notch above Sachin

(CHARLESTOWN, NEVIS)- Over Twenty years ago at a local bar in the village of Brown Hill, I listened intently as two ardent supporters of cricket, gave their opinions as to who was a better batsman between Brian Charles Lara and Sachin Ramesh Tendulkar. At that time Lara had only played two Test Matches, one being the famous encounter at Kensington Oval in Barbados against South Africa which was boycotted as a result of the exclusion of Anderson Cummins. 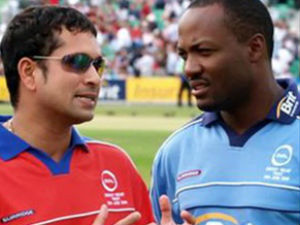 Cricket has been blessed with some of the most astute ambassadors of batsmanship that the world has ever seen. There has been the flair of Vivian Richards, the divinity of Donald Bradman and the resilience of Jaques Kallis, which have left cricket followers overawed.

These players however, have not managed to polarize opinions about their status as the best batsmen that the world has ever seen, as much as two men who have made headlines time and time again. These two greats have drawn comparisons with the likes of Jaques Kallis, Inzamam Ul Haq, Ricky Ponting and Rahul Dravid, yet tend to surpass them in terms of strength, erudition, dexterity and dynamism.

They are undoubtedly the greatest batsmen that the game of cricket has ever known and their contribution to the sport is monumental. One of them has carried the hearts of millions of passionate supporters on his shoulders for more than two decades, where the other has single handedly kept a side like the West Indies on the map, in times when the team had been faltering miserably. These two diminutive, dangerous, diabolical and dexterous batsmen are Sachin Tendulkar and Brian Lara.

The latter has retired after constructing an extraordinary career, and even though the former has not been as prolific like he once was he is still a force to be reckoned with. Their contributions to India or the West Indies thus, need no explanation or justification. For any passionate cricket lover who grew up watching these two batsmen bat, an array of top quality strokes comes to one’s mind when their names are mentioned. Their wrist work, cover drives, defensive strokes and penchant for scoring big had reasserted them as the most prized wickets by their respective oppositions. They are greeted with standing ovations all around the world and a distinct buzz could be heard around the ground, when they took guard. No other batting duo has been worshipped this far and this wide, in terms of gravity. No other duo has however, polarized opinion amongst their diehard fans, over which of them was the better batsman. It might be an audacious claim to make, but, history, statistics and an impartial analysis, would consider Brian Lara to be just a tad more superior to the Little Master from Mumbai.

The reasons are not as obvious though. Sachin Tendulkar has a phenomenal record, and has been hailed by Donald Bradman to be a replica of the Don himself. His is the finest player in terms of the number of runs he has managed to score, and his status as the greatest player to emerge from India would never be disputed. Numerous match winning accolades have come in the way of this mighty batsman and he is considered no less than a god by billions of supporters. It is perhaps the hype that Tendulkar has received and the pressure that he has borne that has made him a great batsman.

Yet the fact remains, that Tendulkar lacked the ‘X’ factor that Lara had in his prime. The man from Port of Spain did not have the privilege of playing in a team which had an array of top quality players at their disposal, where the likes of Sourav Ganguly, Raul Dravid VVS Laxman and Mohammad Azharuddin, were among Tendulkar’s contemporaries.

The dashing left hander from Trinidad and Tobago also played in a time when he was indisputably, the best player in the team by a considerable margin. The West Indies had weathered off in the distance after the early 1990s, where their status of being world champions and being invincible at the same time, becoming a thing of the past. Lara however, reinsured that the last spice of West Indian batting kept on peppering salt less salad bowls, in times when those who devoured them were about to get fed up.

Lara captained his team like Tendulkar did once, but was comparatively more successful as he led The West Indies to a Champions Trophy victory in 2004. He had his ups and downs however, yet unlike Tendulkar, Lara kept on cherishing the job and ensured that he could contribute when all the others failed around him.

Yet as a batsman, he oozed with style. It was all about a high bat lift, low leveled eyes and a flashing blade that sent the ball rocketing towards the boundary. He was an icon in the minds of many young left-handers, and a player that neutrals were overwhelmed by. Tendulkar at the same time was in a league of his own and played some exquisite strokes which were equally pleasing to the eye.

His technique however, was replicated by quite a few players such as Kumar Sangakara and Rahul Dravid, both of whom were equally proficient at defending the ball with a straight bat. Replicating Lara however, bordered on the preposterous for many, with Darren Bravo of the West Indies being the only player who could pull it off at the international level, albeit with inconsistency.

It is a well known fact that the greatest batsman in the world would be someone who could pull off match winning contributions against some of the best bowling attacks around. Lara’s 153 not out against Australia at Bridgetown in 1998/99, went down as the greatest Test match innings of all time behind Sir Donald Bradman’s score of 270 according to Wisden because of his ability to win the game for his side from a precarious situation.

In contrast, Tendulkar has made more centuries than Lara, but some of them have not been match winning contributions or had such a huge impact on the outcome of the game as Lara’s did. One can think of examples, where his ton against Bangladesh in the Asia Cup of 2012 or England in the ICC World Cup of 2011, proved to be futile efforts.

Lara is also the first man to score a quadruple century in the history of Test cricket. That innings at the ARG ground in Antigua helped the West Indies avoid a white wash in a Test series that had been dominated by England from the outset. Much to the disgust of many, Tendulkar does not have a single triple century to his name, where even the likes of his fellow team mate Virender Sehwag and detonator Chris Gayle, have triples under their belt.

That innings from Lara; however, was inhumane due to a plethora of reasons. He had lost the world record to Mathew Hayden earlier, who dished it out against a meek Zimbabwe bowling attack at Perth. He reclaimed it within months, with the nice little nudge for four off Gareth Batty, helping himself immerse in glory. His 375 not out at the same venue against the same team in 1994, had already brought this man into the lime light and a series of cricket games were launched in tribute to the genius, shortly after.

He retired after the World Cup in April of 2007 to a resounding applause at the Kensington Oval, amid tears from his passionate followers. He entertained crowds and played with such flair that he was considered as extraordinary to say the least. Sachin Tendulkar is still out there however, and he continues to battle it out for India in national colours. The records would continue to tumble as long as Tendulkar bats at the crease, but there is no disputing the fact that if Tendulkar is a modern great, then the retired Lara was certainly better.