Tagenarine “Brandon” Chanderpaul has made his Test debut for West Indies, 28 years after his legendary father Shivnarine made his debut for the Caribbean side. The left-hander was named in the starting XI for the opening Test at Perth Stadium which bowled off on Wednesday morning (Tuesday night Caribbean time). 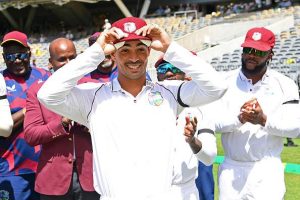 He was presented with his Test cap by West Indies icon Brian Lara, the former captain who played alongside the elder Chanderpaul for much of his illustrious career.

West Indies were asked to field after Australia won the toss.

Chanderpaul came into the match following a century and half-century in the four-day first-class match against the Australian Prime Minister’s XI at Manuka Oval in Canberra last week.

This marks the third occasion in West Indies Test history that a father and son have played at the highest level. The first was Ron Headley, son of legendary George Headley who debuted in 1973. Ron’s son Dean also played for England.