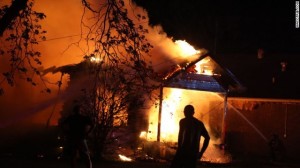 A massive explosion at a fertilizer plant on the edge of the town killed an estimated five to 15 people, wounded more than 160, leveled dozens of homes and prompted authorities to evacuate half their community of 2,800.

“It was like a nuclear bomb went off,” Muska said. “Big old mushroom cloud.”

The Wednesday night blast shook houses 50 miles away and measured as a 2.1-magnitude seismic event, according to the United States Geological Survey.

Officials offered differing figures for the death toll, with Sgt. William Patrick Swanton of the nearby Waco Police Department saying between five and 15 people had died.

But fire officials fear that the number of casualties could rise as high as 60 to 70 dead, said Dr. George Smith, the emergency management system director of the city.
expec heavy casualtiesminutes of seismograph shows a first burst during the explosion and a second burst from the sound wave.
“That’s a really rough number, I’m getting that figure from firefighters, we don’t know yet,” he said. “We have two EMS personnel that are dead for sure, and there may be three firefighters that are dead.”

What caused the explosion at the West Fertilizer Co. was not immediately known. But its location — next to an apartment complex, a nursing home and a middle school — did not help matters.
The blast stripped the apartment complex, with 50 units, of its walls and windows. “It was just a skeleton standing up,” Wilson said.

The nursing home, with 133 residents, was quickly evacuated.

“Until we know this is an accident we will conduct this as a crime scene,” Swanton said. “Nothing at this point indicates we have had criminal activity, but we are not ruling that out.”