Basseterre, St. Kitts, January 21, 2014 (SKNIS): The lighting project of the Warner Park Cricket Stadium has shifted to a new phase as focus will now be paid on training.

Persons moving throughout Basseterre last week may have noticed the rack of outdoor sports lights mounted on four, two pole design structures. There are 72 individual bulbs on each structure for a total of 288 bulbs. These will provide about 3,600 lux of lights to illuminate the field for night matches. Lights have also been erected at the Len Harris Cricket Academy located in Warner Park allowing players to train at nights – a convenience not available anywhere else in the Caribbean. 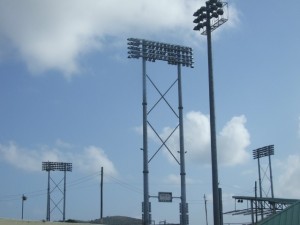 Senior Sports Officer Vernon Springer told SKNIS that the requisite wiring and control consoles for the lights as well as the five screens, including the 44×22 foot jumbotron, were now being installed by local electrical engineers guided by the expertise of officials from Ardent Lighting Group in the United States.

When completed, the workers and other persons will go through sessions of how to operate the terminals. Courses are also scheduled on the operation for the screen technology which is a relatively new design incorporating 64 trillion colours, as well as the new generator and transmission which is completely digital.

“The next five to seven days is going to be critical,” Mr. Springer stressed. “It’s going to be an ongoing process and all of this is in preparation for two scheduled games which are already on the West Indies Cricket Board (WICB) calendar.”

The outdoor sports lights, generator and jumbotron all have a 10 year warranty and the contract includes a two year period for maintenance and training.

“Even though we are going to start the training for the folks to operate the generator, switches for the lights, the jumbotron and all of the other stuff, this is going to be a an ongoing process for the next two years until we are sure that everybody is competent and comfortable,” Springer disclosed, adding that new persons will also have the opportunity to be trained.

Officials from Prabha International are confident that no major problems will develop and will also be monitoring the performance of the various devices via a secured live link.