Basseterre-St. Kitts-At a glance, it would appear as if the odds were against them. 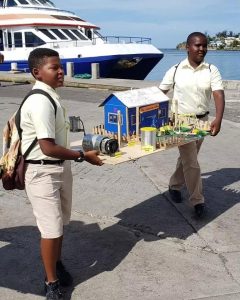 The Ivor Walters Primary School of Nevis, was engaging in a competition that involved eight other schools and all from St. Kitts.
Add to that the fact that the competition was being held in St. Kitts.
However, just as true as David killed Goliath, the IWPS was represented by two confident young men, in Lythe Browne and Nevroy Manners and they came with a unique and powerful project presentation, that turned heads in their general direction.
The occasion was the Ross University’s Lab week Science fair, held on Wednesday 24th April, at the Independence Square in Basseterre.
Browne and Manners presented on the topic ‘Geothermal Energy,’ bearing the theme: ‘Light your world with Geothermal.’
They placed first in the renewable energy category and to top it off, won the overall competition, for good measure.
Nevroy Manners is a grade 6 student, while Lythe Browne is still in grade 5.
The project was the brain child of Guidance Counselor at the school, Mrs. Shevonne Lowe who received assistance from her husband, teachers at the school, parents, Levi Manners (uncle of Nevroy) and a number of other individuals, in order to make the project a reality. 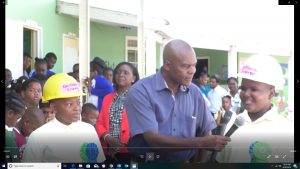