BASSETERRE, ST. KITTS, APRIL 8TH 2013 (CUOPM) – The Federation’s lone female government minister Sunday blasted the opposition People’s Action Movement (PAM) accusing it of selling out the people of St. Kitts in the 1983 Constitutional Talks and stated that the Party only calls for unity when it is weak.

She told a mammoth crowd at a meeting in her Central Basseterre constituency that the proponents of the unity movement are also disunited as to who should be leader of the unity government. 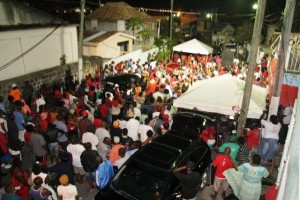 “Whenever PAM is weak, they call Unity. It happened in 1980 when they couldn’t form the government on their own and so they said unity. They joined up with the Nevis Reformation Party (NRP) and they had to give Simeon Daniel the Ministry of Finance, so the Minister of Finance came from Nevis and (Prime Minister the Rt. Hon. Dr. Kennedy) Simmonds and the rest of them couldn’t sleep because Nevis had the Ministry of Finance,” she said.

“That was part of the deal that they had to give the Ministry of Finance to Nevis and then we had Independence and then we have political constitution and nothing in the constitution says anything about St. Kitts,” said Ms. Liburd, adding:

“PAM sold out St. Kitts people for politics. When you check the constitution you will see that there are only two entities in the Constitution; one is Nevis and the other is St. Kitts and Nevis, so where does St. Kitts fall?,” she asked.

Ms. Liburd, the Minister of Health, Social Services, Community Development, Culture and Gender Affairs pointed out that it was not for the want of talking by then Leader of the Opposition and Labour Party leader, the Hon. Lee L. Moore and the opposition team who presented an alternative, called ‘In Place of Strife.’

“They didn’t bother with them because they wanted to be in power so bad, that they sacrificed Kittitians on the altar of politics. So today, we Kittitians have no identity because of PAM and I am telling you this now because they are now talking about Unity again. They are very ,very, weak. Their leader has no national appeal. Even in the Unity story, there isn’t anybody calling his name to be the leader, not even the PAM people,” said Ms. Liburd, a former speaker.

“Richard Caines say that Timothy Harris should be the Leader and not Shawn Richards. When you ask Eugene Hamilton who the leader is, he could not answer. He could not even say Shawn because they know that Shawn isn’t really any leader. As a matter of fact, when you look around and see what is happening, the real leaders of PAM are reappearing. Two persons going around to houses saying that they are PAM representative for the Constituency of Central Basseterre and people called me and complained asking why PAM doesn’t get their act together,” she said.

“So right now the talk is about Unity, but everybody knows that the factions in there got their own individual agenda. PAM so weak, that they cannot bargain anything; because they are not going to get the leadership or nothing out of it. All they say they want is for Labour to come out of power. They only want Douglas and Labour out that is their motive,” she said.

“Then you have Timothy Harris who wants to be the Prime Minister. He wants to be the Prime Minister so bad that he could be begging pardon from all the PAM people around the place and it was them (PAM) who turned him away. They are not asking him for any forgiveness, but he asking them to forgive him. They took bread out of his mouth. They decided that he shouldn’t eat, but now he is with them. They are together. You know that they can’t trust one another in there because they are saying ‘if they could treat their own Labour people like that, what would they not do to us?’ So you know there is no trust in there, but all of them have their own agenda,” Ms. Liburd pointed out.

Returning to the 1983 Constitution, she pointed to the calamity if the CCM representatives becoming assuming leadership of the Federal Cabinet.

“Could you imagine what it would be like if one of them became the Prime Minister of St. Kitts and Nevis? What would happen to St. Kitts and its people? What a conundrum we will have in this constitution now, where you have the Premier of Nevis (Hon. Vance Amory) or the Deputy Premier of Nevis, also being the Prime Minister at the same time. How would that work? But that is what your Constitution can give you, because PAM sacrificed St. Kitts people,” said Minister Liburd.

She pointed to the recent news that the Director of Culture in Nevis is reviewing the policy as to whether or not Kittitians could participate in the annual Culturama in Nevis.

“We love our Nevis people. We are one country, one federation, so we are not saying that Nevis people can’t participate with us. I want you to know that CCM do not think so all. This Unity thing is a farce,” said Ms. Liburd, noting that the Deputy Premier and Deputy Political Leader of the Concerned Citizens Movement, Hon. Mark Brantley is a secessionist.

“Hon. Mark Brantley is a secessionist all his life, so I don’t know how he could be for unity and Hon. Vance Amory is the only Nevisian politician who has ever invoked the Secession clause in the Constitution. NRP bargained for it when we went to independence in 1983 and the only politician to try to invoke the secession clause is Vance Amory. So the two of them are along the path of Secession, but they say they are Unity,” she remarked.

Minister Liburd said there is only one united party in this country and that is the governing St. Kitts-Nevis Labour Party.

“One united party with one vision and one mission and that is to serve the ordinary people of this country. That is our mission. That is what you voted for us for. You didn’t vote for us to scrabble to see who is going to be the Prime Minister. You voted for us to serve you and that is our pledge and commitment to continue to use every ounce of our energy to serve the people of country, especially those who are least able to take care of themselves. One united party. So stand firm with Labour and have confidence,” she said.

Government of St. Kitts And Nevis Moves Closer to Establishing A Robust Waste…