Basseterre, St.Kitts (July 18th 2013):-Scores of nationals from St. Kitts and Nevis living in Toronto and surrounding areas heard first hand a frank and honest report on the current state of affairs in their land of birth. 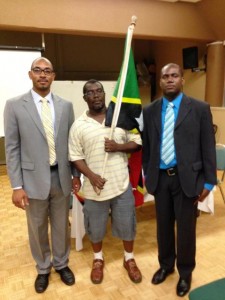 People’s Action Movement Leader Hon. Shawn K. Richards , along with Co-Deputy Leader and Constituency #2 Candidate Jonel Powell provided information on a range of issues including most significantly the failure of the government to have debated the Motion of No Confidence that has been filed since December 2012, the recent political unrest and tension in the country as well as some plans and policies for the future under the historic government of National UNITY.

The evening was moderated by Financial Analyst Sydney Liburd while Vernon Duporte introduced Jonel Powell and Sheldon Pemberton introduced Hon. Richards. Both gentlemen gave exceptional presentations that were well received by the enthusiastic and attentive audience.

The meeting culminated with a very vibrant Questions and Answer segment where comprehensive answers were given by the PAM Leaders to several questions relating to issues including the Motion of No Confidence and the proposed boundary changes which were the most concerning of the issues raised along with the Land for Debt Swap, the IMF bailout, the National Debt, the SIDF and the historic government of National Unity which got the full endorsement of all present.

One national from Nevis raised a concern about the SIDF and it’s lack of transparency and the failure of Nevis to get it’s fair share. Hon. Richards assured him that his concerns will be positively addressed with the new and historic government of National UNITY.

With reference to the proposed boundary changes Hon. Richards indicated during a post meeting cocktail that the government had no authority to change boundaries and the Elected Majority in addition to the people would not allow any boundaries to be changed at this time.

“Hon. Shawn K. Richards and Jonel Powell are fabulous ambassadors of our country. They presented and represented superbly. I am confident that the future of my beloved homeland will be in committed, capable and caring hands with Mr Richards and Mr Powell as part of the government of National UNITY,’ said Jovanah Browne a SKN National who drove 2 hours to be a part of the meeting.

Many expressed an interest in returning to St. Kitts and Nevis or moving to give a worthwhile contribution to the social and economic development of their homeland.

The large audience took the opportunity after the meeting to socialize and many lined up to take photos with the PAM Leaders.

An official of the organizers of the meeting the PAM Canada Group said “The meeting was a tremendous success and the nationals who came were impressed by the presentations given by the PAM leaders . Hon. Shawn K. Richards gave a superb presentation and answered the questions posted in a very insightful and comprehensive manner . Jonel Powell was equally impressive and handled himself like a veteran politician. It is obvious they both have a passion for their country and their fellow citizens. The meeting is just one of a number of events we have been organizing in support of the People’s Action Movement and our country on a whole. On Saturday we weill be having a fund raiser in Mississauga and we expect to have a number of activities over the next few weeks. For further details persons can email janellebrowne@hotmail.com”

The third and final meeting on the PAM UNITY North American tour will be on Friday July 19th at 6:30 pm at the Ramada Inn Miami , Airport North, 1950 West 49th Street, Hialeah Fl