The Nevis Island Team journeyed to St.Kitts on Saturday January 18th for a highly anticipated match-up against the St.Kitts Island Team in the final game of the inaugural Sugar MAS Basketball Cup. Each team having won one game each competed for the bragging rights of being the first ever Sugar Mas Cup Basketball champions. 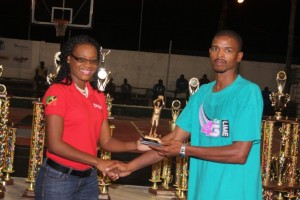 St.Kitts dominated the match-up outscoring their Nevisian counterparts in all 4 quarters. The first quarter score was 14 – 5 then at the end of the half the St.Kitts Ballers were up 44-18. The game ended with a fairly convincing 59-41 victory for St.Kitts The Victory Earned newly appointed St.Kitts National Team Coach BJ Mumford his first national series victory. Nevis was Coached by former St.Kitts-nevis National Team Coach and SKABA President Mr Charles Morton.

Following the game, the Basketball Association brought the curtain down with the prize giving ceremony awarding the players and teams from 2011 to 2013. The Executive now looks forward to the 2014 league and all the other activities and events that have been planned.