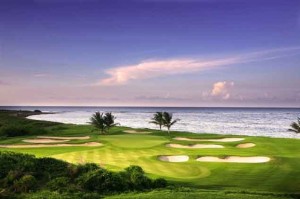 Tony Leodora in his Golf Talk Live Blog in the Montgomery Media Blog Center notes that in recent years, the big word throughout the golf industry worldwide has been “contraction.”

“Especially in the United States, the number of golf courses has been contracting rapidly. During 2013 a total of 158 golf courses closed in the U.S., compared to only 14 courses opening,” wrote Leodora, among a hosts of autonomous bloggers, who lve and work in Montgommery County.

“There are very few areas in the world that have shown golf growth. Everyone points to China as the leading example. And, certainly, there has been great growth in China.

But that country pales by comparison to the growth that is taking place in another country. Within the next couple of years, the amount of golf courses on the tiny West Indies island of St. Kitts will triple.

Dating back to 1976, when architect Robert Trent Jones first brought golf to the island with the opening of the Royal St. Kitts GC, visitors had only one option. That is changing rapidly.

Another spectacular project, Christophe Harbour, also is underway. It will combine luxury residential properties, with several five-star hotels and a mega-yacht marina – all complemented by a Tom Fazio-designed golf course. Target for opening is 2015.

In advance of the new developments, the original Royal St. Kitts GC also underwent a major renovation that established it as an excellent example of resort golf. It is an extremely enjoyable layout, yet the ever-present trade winds can add enough challenge for any level of golfer.

“We realize now how important golf can be to the total tourism capability here on St. Kitts,” said Ricky Skerritt, St. Kitts Minister of Tourism. “The beauty of the island is the main attraction, but playing golf on such a beautiful island is very appealing to a lot of people.”

Mike Cole is a PGA professional who grew up in Kalamazoo, Michigan. Twelve years ago he moved to Jamaica and ran the golf program at the famous White Witch GC. In 2013 he followed the renovation at Royal St. Kitts GC and moved to the island.

“I saw the tremendous potential that exists here,” said Cole. “The quality of life is absolutely great. As soon as more people learn about this island, it will become the hottest thing in the Caribbean.”

The renovation of Royal St. Kitts Golf Club by Canadian architect Thomas McBroom established it with modern drainage and the latest technology with regard to turfgrass and agronomy.

There is a links-style feel to the course, as few trees dot the landscape and the seaside back nine is whipped by the ever-present trade winds. However, golfers are able to find almost any shot they hit. That factor aids pace of play, often a point of contention at resort courses that were designed to be too difficult for the caliber of everyday player.

The new Kittitian Hill course should be quite the opposite. Located on a former 400-acre sugar plantation, the golf course has more than 200 feet of elevation change. Also, there are a series of “gaughts” or ravines that are caused by extreme storm water runoff. Golfers will have a total of 10 forced carries across the hazard areas.

The course plays up the side of a mountain, affording spectacular water views and panoramic vistas of the countryside. The entire project is being planned with the environment in mind.

“The plan is not to use any insecticides or pesticides on the course,” explained Bob Harrington, the golf course project manager. “There are going to be a number of areas on the property where organic farming will be practiced. A farm-to-table culinary style will be part of the culture here. As a result, great care is being taken to preserve the natural condition of the property.”

At Christophe Harbour, the scale of everything is grand. The project covers 2,500 acres of cliffs and waterfront on the southeast tip of St. Kitts.

“This is one of the most spectacular projects I have ever been involved in,” said renowned golf course architect Tom Fazio, who has been involved in a number of world-class golf properties. “The only word you can use to describe every phase of Christophe Harbour is ‘spectacular.’ It is absolutely breathtaking.”

With regard to the golf course, which is currently under construction, Fazio had the same impressive assessment. “Take the best holes at Pebble Beach and put them on cliffs about 100 feet above the sea,” said Fazio. “That’s what the entire course will be like.”

With that kind of quality golf situated on a small island, there is a substantial amount of attraction for the traveling golfers of the world. If that is not enough, there is always the sister island of Nevis, just a short ferry ride away. A Robert Trent Jones II golf course, with more spectacular views of the Caribbean and Mt. Nevis, is located at the impressive Nevis Four Seasons Resort.

All of this development will enhance the natural beauty that exists on St. Kitts – one in a string of Caribbean islands that share a volcanic origin.

“I hear a lot of people comparing the look and feel of St. Kitts to Hawaii,” says Tom Jaronski of The Golf Connection, a Royersford, PA-based company that runs pro-am golf tournaments throughout the Caribbean and Mexico. “The golf is great. The scenery is great. The weather is great. The biggest challenge St. Kitts faces today is that not enough people know anything about it. Once they come, they’re hooked.”