Basseterre, St Kitts, July 4, 2020 – A Nigerian internet fraudster, Abbas Ramon Olorunwa, also known as Hushpuppi, who was given a St Kitts and Nevis passport in February this year. has been nabbed by the United States Federal Bureau of Investigation.

Hushpuppi specialised in an business email comprise, in which he and his allies targeted several companies across the world especially in the United States and United Kingdom and used proceeds of their fraudulent scheme to finance their lavish lifestyles. 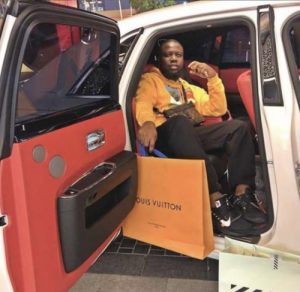 According to Sahara Reporters, inside details of how the United States Federal Bureau of Investigation unearthed the fraudulent activities of Abbas Ramon Olorunwa, widely known as Hushpuppi emerged in an affidavit attested to by Andrew John Innocenti, a Special Agent of the agency, on June 25, 2020, in Los Angeles, California before U.S Magistrate Judge, Rozella A. Oliver.

On February 24, 2020, rayhushpuppi@gmail.com received a scan of a Saint Christopher (St. Kitts) and Nevis passport of Abbas with the passport number ending in 4154. The passport was issued in St. Kitts in February 2020 and also listed Abbas’ birthday as October 11, 1982.

The document seen by SaharaReporters on Friday revealed how the 38-year-old Nigerian conspired with several others across various parts of the world to execute huge financial scams by defrauding individuals and redirecting hefty payments meant for organisations into private bank accounts in countries like Romania, Bulgaria and United Arab Emirates.

Relying on data carefully analysed from several iPhones belonging to Hushpuppi, the FBI was able to discover loads of communications between the suspect and his collaborators leading up to the execution of several high profile fraud mostly involving illegal wire transfers and diversion of funds meant for others to bank accounts of their choices. 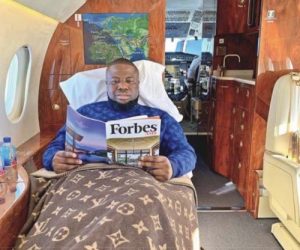 “Beginning no later than October 15, 2019 and continuing through at least October 17, 2019 in the county of Los Angeles in the Central District of California and elsewhere, the defendant conspired to launder proceeds fraudulently obtained from a law firm in violation of Code Section Offense Description 18 U.S.C. § 1956,” Special Agent Innocenti began in his testimony.

“Abbas, specifically provided co-conspirator 1 with two bank accounts in Europe that Abbas anticipated would each receive €5m of the fraudulently obtained funds including a fraudulent scheme to steal £100m from an English Premier League football club.”

Speaking further, the FBI Special Agent disclosed in the affidavit how analysis of mobile communication gadgets including email correspondences between Hushpuppi revealed how they deployed various tactics to carry out their operations.

“The email account rayhushpuppi@gmail.com also contained emails with attachments relating to wire transfers in large dollar values, including wire transfers in February 2018 in the amounts of $250,000 and $2,397,000.

“Based on the context of the emails, as well as other information gathered during the FBI investigation about one of the sender email accounts, it appears that these emails were related to fraudulent transactions.

“In or around October 2019, Abbas had conspired with co-conspirator 1 and co-conspirator 2 to commit a fraudulent wire transfer and money-laundering scheme in which a U.S. victim (the “Victim Law 15 Firm”) lost approximately $922,857.76. The messages reflected that part of the scheme, including acts in furtherance of the conspiracy, occurred while co-conspirator 2 was physically present in the Central District of California.

“Records obtained from JPMorgan Chase Bank (“Chase”) for a bank account held in the U.S. (the “Chase Account”) reflect that the Chase Account received a wire transfer on October 15, 2019 for approximately $922,857.76 from the Victim Law Firm. On October 17, 2019, there was a wire transfer from the Chase Account to an account at Canadian Imperial Bank of Commerce (“CIBC”), in Toronto, Ontario, for approximately $396,050. Bank records reflect that the specific account at CIBC ended in 1716 (the “CIBC Account”), consistent with what is discussed below in paragraphs 21, 24, and 25. The remaining funds in the Chase Account were transferred to other accounts.

“In a message on January 16, 2019, co-conspirator 1 contacted Abbas asking for two European bank accounts that could receive €5m, which he said would be from the country in which the Foreign Financial Institution is located.
Co-conspirator 1 stated several times that the “hit” would occur on February 12.

“After some discussion, Abbas sent co-conspirator 1 the account information for a Romanian bank account, which he said could be used for “large amounts”.

“Abbas further said he could provide another account and co-conspirator 1 said that it would be a payment of €5m million to each account.

“On February 10, 2019, co-conspirator 1 told Abbas, “Brother, tonight is my deadline to submit anything more,” and then asked, “Do u want add one more or just stick to that one u gave me ?” The next day, Abbas responded and provided account information for another bank account in Bulgaria.

“On March 10, 2019, co-conspirator 1 requested a bank account in the U.A.E. from Abbas into which approximately $5m could be deposited from a victim in the United States. Co-conspirator 1 told Abbas that the “job” would be “Monday am USA time,” and after some discussion, wrote, “Brother, I need it now or we will lose our chance pls”.

“On April 30, 2019, co-conspirator 1 told Abbas, “Brother, I have 4 companies in the UK ready to switch bank accounts on file but the account has to be open beneficiary”.

“After some discussion, co-conspirator 1 further stated, “I have a room working for me, we have leads and company contracts. My guy are changing accounts on file for 100m contracts and there payment are once or twice a week 1-5m. I have four ready to switch up,” it was disclosed.

Even though Hushpuppi and his allies were running an international fraud network, they constantly deployed some Nigerian street language to code their activities in order to keep it away from prying eyes.

Explaining some of these terms in his affidavit to the US magistrate, Innocenti said, “I know based on my training and experience and from other FBI agents who have experience with these matters that Nigerian-origin subjects sometimes use the words “aza” (sometimes “azar,” “azza,” or “azah”) or “house” to refer to a bank account used to receive proceeds of a fraudulent scheme.

“The word “house” is also sometimes used to refer to a bank itself. I observed that, in other messages with Abbas, co-conspirator 1 used the term “azza,” in addition to using the term “house”. While co-conspirator 1 is not Nigerian, he is known to have communicated with multiple Nigerian-origin co-conspirators.”

Hushpuppi purchased passport of another country to escape justice

The FBI investigation further revealed how Hushpuppi used his ill-gotten wealth to acquire various travel documents for himself including two Nigerian passports and one of St. Kitts and Nevis.

The country’s passport is very well regarded and has excellent reputation and can be issued to persons, who make substantial financial investment in the Caribbean nation.

By acquiring the passport of St. Kitts and Nevis, Hushpuppi was able to travel to various parts of the world to enjoy his ill-gotten wealth without law enforcement agents in these places turning the radar on him.

“On February 24, 2020, rayhushpuppi@gmail.com received a scan of a Saint Christopher (St. Kitts) and Nevis passport of Abbas with the passport number ending in 4154. The passport was issued in St. Kitts in February 2020 and also listed Abbas’ birthday as October 11, 1982.

“On February 23, 2020, rayhushpuppi@gmail.com sent an email containing a photograph of a different Federal Republic of Nigeria passport of Abbas with a passport number ending in 5915, as well as a U.A.E. visa with the same resident ID number ending in 9431.

“The email account rayhushpuppi@gmail.com also contained photographs or scans of foreign identification documents of approximately 13 persons other than Abbas of different nationalities (including Nigeria, U.K., Kenya, U.A.E., U.S.A., and Pakistan),” the affidavit said.

While indeed what led to his eventual arrest in June was a culmination of months and maybe years of investigation by the FBI and its partners around the world, it is Hushpuppi’s regular show offs on social networking platform, Instagram that gave him away the most as a con artist and a person, who needed to be watched more closely.

Boasting of over two million followers on the popular photo-sharing platform, the 38-year-old Nigerian constantly serenaded his viewers with images of his luxury lifestyle in Dubai, United Arab Emirates, where he lives at the expensive Palazzo Versace reserved for the super rich.

“In or around December 2019, April 2020, and June 2020, I reviewed the publicly viewable Instagram account of “Hushpuppi” at
www.instagram.com/hushpuppi.
Based on information available on the profile page, the user of that account made more than 500 posts and had 2.3 million followers as of June 2020.

“This Instagram account included numerous publicly viewable images of a man who appeared to be Abbas, based on comparisons to photographs of Abbas in passports and other identification documents referenced below in paragraphs 16.c to 16.c.iv. Hundreds of these images on the Instagram account showed Abbas in designer clothing and shoes, posing on or in luxury vehicles, wearing high-end watches, or possessing other luxury items, indicating substantial wealth.

“For example, on June 6, 2020, Abbas posted a photograph of a white Rolls Royce Cullinan that included the hashtag “#AllMine”.
On February 27, 2019, Abbas posted a photograph of himself in front of two vehicles, one of which he described as his new Rolls Royce Wraith. Based on review of publicly available pricing information, the starting price for each of these vehicles is approximately $330,000.

“More than two dozen images showed Abbas in front of, on top of, or inside other luxury vehicles, including multiple models of Bentley, Ferrari, Mercedes, and Rolls Royce.

“On multiple dates, including April 17, 2020, June 19, 2019, and July 1, 2019, Abbas posted images of himself inside or in front of private jets. Multiple photographs also appeared to show Abbas posing in locations aroundthe world (such as Dubai and Paris).

“The FBI’s investigation has revealed that Abbas finances this opulent lifestyle through crime, and that he is one of the leaders of a transnational network that facilitates computer intrusions, fraudulent schemes (including BEC schemes), and money laundering, targeting victims around the world in schemes designed to steal hundreds of millions of dollars.

As a result of these crimes, Hushpuppi now faces a maximum jail term of 20 years in US federal prisons if convicted.

According to legal experts, who have weighed in on the matter, it could be tough for the 38-year-old Nigerian to escape maximum punishment especially going by the plethora of evidence against him by the FBI and other partner organisations that investigated his activities.