SEOUL, South Korea – North Korea on Tuesday urged all foreign companies and tourists in South Korea to evacuate, saying the two countries are on the verge of nuclear war. The new threat appeared to be an attempt to keep the region on tenterhooks over its intentions. 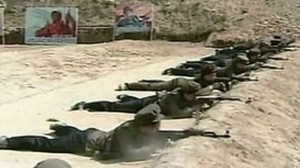 Analysts see a direct attack on Seoul as extremely unlikely, and there are no overt signs that North Korea’s 1.2 million-man army is readying for war, let alone a nuclear one. South Korea’s military has reported missile movements on North Korea’s east coast but nothing pointed toward South Korea.

“The situation on the Korean Peninsula is inching close to a thermonuclear war due to the evermore undisguised hostile actions of the United States and the south Korean puppet warmongers and their moves for a war against” the North, said a statement by the North Korean Asia-Pacific Peace Committee, an organization that deals with regional matters.

The statement is similar to past threats that analysts call an attempt to raise anxiety in foreign capitals. Observers say a torrent of North Korean prophecies of doom and efforts to raise war hysteria are partly to boost the image of young and relatively untested leader Kim Jong Un at home, and to show him as a decisive military leader.

Another reason could be to use threats of war to win Pyongyang-friendly policy changes in Seoul and Washington. Last week, North Korea told foreign diplomats in Pyongyang that it will not be able to guarantee their safety as of Wednesday. It is not clear what the significance of that date is.

South Korean President Park Geun-hye, who has sought to re-engage North Korea with dialogue and aid since taking office in February, expressed exasperation Tuesday with what she called the “endless vicious cycle” of Seoul answering Pyongyang’s hostile behavior with compromise, only to get more hostility.
U.S. and South Korean defense officials have said they’ve seen nothing to indicate that Pyongyang is preparing for a major military action.

Despite the lack of evidence that the North is actually preparing for a war, the United States and South Korea have raised their defense postures, and so has Japan, which deployed PAC-3 missile interceptors in key locations around Tokyo on Tuesday as a precaution against possible North Korean ballistic missile tests.

Also Tuesday, North Korea said it was suspending work at the Kaesong industrial park near its border, which is combines South Korean technology and know-how with North Korea’s cheap labor. North Korea pulled out more than 50,000 workers from the complex, the only remaining product of economic cooperation between the two countries that started about a decade ago when relations were much warmer.

Other projects from previous eras of cooperation such as reunions of families separated by war and tours to a scenic North Korean mountain stopped in recent years.