At that ceremony the company known as OMNI GLOBAL which has formed an alliance in a bid to produce electricity using waste materials with the Nevis Island Administration, officially handed over two brand new, fully computerized Disposal trucks to the NSWMA.

An elated manager at the Authority, Mr. Andrew Hendrickson, chaired the proceedings and warmly welcomed all present. He thanked his staff for ensuring that preparations were in place for the ceremony and stated that it was a great day for Nevis.

The ceremony commenced with the invocation delivered by Pastor Bernard Browne and this was followed by remarks delivered by Mr. Carlisle BINGHI Pemberton, Chairman of the NSWMA board.

He noted that the day was much anticipated and longed for and came after quite some negotiations and interaction between the NIA, THE NSWMA and Omni Global.

He indicated that the workers at the Authority were already committed to doing a great job in keeping the island clean and opined that they will now do an even better job, with the addition of the new trucks. He also stated that they will ensure that the trucks are well maintained and properly taken care of.

Mr. Steve Hammond of Omni Global then addressed the gathering. He noted that he has been coming to Nevis over the past twenty years and feels as if he belongs. He stated that as an Australian, he has promoted Nevis in his home country as well.

He thanked the Nevis Island Administration for getting on board with the waste to energy project with his company and noted that at the end of the day, Nevis will be recognized as a leader in green energy.

He then invited his fellow representative of Omni Global, Mr. David Johnson, to the front and between them both, they handed over the keys to the two trucks, to the Minister of Health in the Nevis Island Administration, Hon. Mark Brantley.

Minister Brantley who was announced by Mr. Hendrickson, as ‘the man of the hour’, indicated early in his remarks that there were many persons involved in making the additional trucks a reality for the NSWMA. He stated that about two years ago, he was approached by Mr. Johnson of Omni Global who told him of the vision of having the waste to energy plant on Nevis. He later expounded the idea at the cabinet level and his cabinet colleagues agreed and from then, plans have been put in place to make the waste to energy plant a reality.

Minister Bartley noted that the waste to energy plant would be ‘a win, win, win,’ situation for the island:

‘There would electricity generated from the waste produced on the island, to add to the projection of the company to also produce solar energy and the Refuse on the island will be properly disposed of and Nevis will be a cleaner, healthier and safer place.

He stated that the Government has already identified lands at Long Point for the actual location of the plant and stated that the work on the solar energy plant will commence shortly.

He also pointed to the fact that the last official, significant donation of a brand new truck, was done in 2008 by the St.Kitts-Nevis Social Security Board and there was a donation of a used truck in 2014, by the Taiwanese government.

He then handed the keys over to Manager of the NSWMA, Mr. Andrew Hendrickson.

In delivering the vote of thanks, Mr. Hendrickson thanked all who had made the grand occasion a reality but singled out mechanics Elvin BROTHER Williams and Winston Bussue for assisting with getting the trucks organized on the day of clearance at the Long Point Port, even in pouring rain.

He also thanked his Operations manager Mr. Rudy Browne for his tremendous work in assisting with clearing the truck and putting certain critical features in place. He then handed the keys over to Mr. Browne, with the words: ‘You are the custodian now.’

The trucks were then blessed by Pastor Browne who asked God to keep all evil forces away and to protect the drivers as well.

Minister Brantley then had the privilege of test driving one of the vehicles which are 2016 Kenworths and he opined that they are so sophisticated that ‘you can almost take a young lady out to dinner in one of these.’ 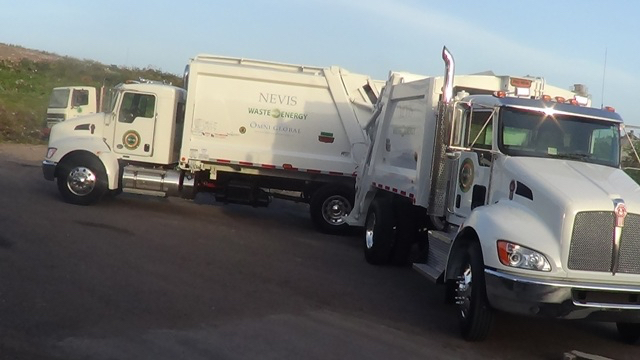