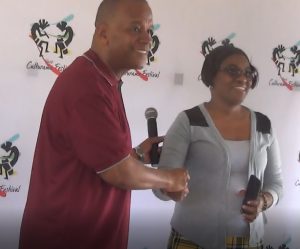 At the media launch held by the Culturama committee on Friday 3rd May, for the first time in the history of the Culturama festival, an official bank and a hotel were named as the bank and the hotel for the festival.
Chairperson of the Culturama committee, Antonio ABONATTY Liburd announced that the National bank of St. Kitts-Nevis and Anguilla has been accorded the distinct honour as the official bank for the festival.
He pointed to the major sponsorship deals received from the institution for the past 15 or more years, as one of the major reasons guiding the decision.
Minister of Culture, Hon.

Eric Evelyn, in congratulating the Bank, stated that the institution increased its sponsorship last year, with a pledge of doing similarly this year and described Marketing Executive, Mr. Anthony Morton, as a man who has ‘Culturama at heart.’
He further indicated that a ticket booth will be erected this year, covered with the colours of the bank.
Mr. Morton in accepting the signal honour, thanked the Minster and the Culturama committee for the gesture and opined that this year’s festival will be a great experience and pledged the bank’s continued support to the endeavours of the committee.
Another grand announcement was also made by Chairman Antonio Liburd.
He stated that his committee has approved the Mount Nevis Hotel, as the official hotel for the festival.
He noted that he and his committee have been in long term negotiations with the hotel and would have received numerous discounts and ‘free bies’.
Minster Evelyn warmly congratulated Manger Jewela and her team and wished them every success I their future endeavors.