Parry: Contract for Progress signals a new level of institutional and political cooperation

PINNEY’S BEACH/PORT ZANTE, ST. KITTS AND NEVIS, DECEMBER 23RD 2014 (CUOPM) –Political Leader of the Nevis Reformation Party, the Hon. Joseph W. Parry has hailed the draft Contract for Progress with the St. Kitts-Nevis Labour Party (SKNLP) as an historic document in the political history of the twin-island Federation. 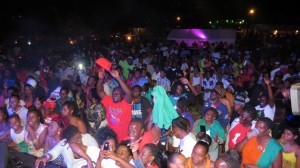 Speaking simultaneously to over 2,500 people in Nevis and over 5,000 in St. Kitts, with the National Political Leader of the St. Kitts-Nevis Labour Party (SKNLP), Prime Minister the Rt. Hon. Dr. Denzil L. Douglas next to him at Pinney’s Beach, Nevis, Mr. Parry said the Contract for Progress solidifies the future of both islands as one nation.

“As a Nevisian, I am thrilled by the prospects of this agreement for our beautiful island, as a citizen of this Federation, I am proud to see us moving forward, working together, joining our brothers and sisters in St. Kitts and Nevis, hand in hand. As the leader of the Nevis Reformation Party, I am honoured by what we have achieved today, oneness! The NRP and the St. Kitts-Nevis Labour Party have worked together for the benefit of our Federation,” said the Hon. Joseph Parry, who added that both parties have learned to communicate.

“We have learned that the NIA and the Federal Government need to work together in harmony. We have seen the benefit of togetherness and what it can bring in terms of development in the economy and in democracy. Our own Patrice Nisbett, a child of Nevis, has been the Minister of Foreign Affairs for our Federation, representing St. Kitts and Nevis around the world,” said Mr. Parry.

He lauded the presentation of the Contract for Progress to the people by the NRP and the SKNLP in public.

“We are earnestly delivering this document to the public. We haven’t signed it behind closed doors. We are not announcing it in government buildings. We are not having our photos taken in suits and ties. We are here celebrating with you, bringing it to you directly right here in Pinney’s Beach and in Basseterre,” Mr. Parry said.

“You can tell us what you think. We are heeding the call of the people. We are waiting for your voices, your thoughts and your desires. After all, we are your Representatives. We are your servants, but trust me when I say this, the Contract for Progress is the greatest thing that has happened for our Federation since independence. This is why we are celebrating tonight and that is why we have you here tonight,” said Mr. Parry.

“We are celebrating progress and democracy. This celebrating signals a new level of institutional and political cooperation, more importantly, this celebration lays the foundation for the voice of the people to be heard,” Mr. Parry said.

He urged all residents and nationals to read the draft Contract for Progress which secures the future and the progress of the federation.

He said the draft Contract for Progress ensures that the Nation does not go off from its part to progress.

“Together we are more than the sum of our parts. Together we are St. Kitts and Nevis, a nation setting an example for progress in the Caribbean and in the entire world. This is what matters, making people’s lives better matters, progress matters,” said the NRP Leader.