Parry seeks to clear his name

Charlestown, Nevis (Friday, October 25th, 2013)- Former Premier and leader of the Nevis Reformation Party (NRP), the Hon. Joseph Parry says that the OECS court system has failed himself and Former Deputy Premier, Mr. Hensley Daniel. The Hon. Parry made the statement on Freedom Radio’s 106.5 FM, “Good Morning St. Kitts Nevis” on Tuesday morning (Oct. 21), days after the Court of Appeal cleared himself and Mr. Daniel of costs to the Hon. Mark Brantley. The court had originally awarded costs to Hon. Brantley in the Election Petition case of 2012 to be paid by then Supervisor of Elections Mr. Leroy Benjamin, Returning Officer Mrs. Bernadette Lawrence and the former premier and deputy premier. 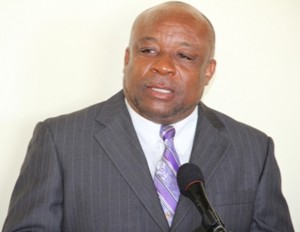 “How could the Court come a year later and say we are in the clear when the damage is already done? My name and Mr. Daniel’s name have been put through the mud, and my party has suffered because the Appeal Court had stated that Mr. Daniel and Hon. Parry should have been charged with bad faith and misfeasance in the preparation of the electoral list and we should be made to pay court costs,” said Hon. Parry. In addition, Former Premier Parry noted that because some members of the general public believed that accusation, because “that is it is what it was, an accusation that went a long way towards costing us the 2013 local elections.”

Parry noted that in the lower court, Judge Lionel Jones had stated that he was not charged with anything, and told him that it was not necessary for him to appear in Court, so he therefore never appeared in the courtroom again.

The Former Premier noted that it is a sad day in Caribbean history when an Appeal Court can be so negligent, and render a verdict that is not based on fact and therefore cost the entire island of Nevis tremendous harm. He said that because of the courts poor judgment, Mr. Mark Brantley seized the opportunity to get the court to prevent Mr. Daniel to run in the 2013 local election and Mr. Keith Scarborough also took the time to put forth an injunction against Hon. Parry on the basis that he is not eligible to run in the 2013 election. However, under Judge John Benjamin the court denied both cases and Parry and Daniel were able to take part in the 2013 election.

“Since the court brought into question the character and reputation of Mr. Daniel and myself, many voters believed the court, and voted with that thought that we had done something wrong! Now, because of that, the Concerned Citizens Movement (CCM) has the island in an economic coma,” said Parry.

He stated that the many projects that the NRP had on stream, including the oil storage facility, the fisheries depot, the cosmetic clinic and the urology center have been stopped by the CCM, and no other private investment has replaced the proposed projects.

“Where are the private investments that they promised the people of Nevis”, asked Parry, in direct reference to Premier Vance Amory and his Deputy Hon. Mark Brantley, who had boldly stated repeatedly during the election campaign, that there were many private investors who were waiting to do business with Nevis.

The Hon. Mark Brantley was represented in court on Thursday, October 17 by Attorney Dahlia Joseph. She offered no evidence against Mr. Daniel, but argued that Hon. Joseph Parry should pay the cost previously ordered. Ms. Joseph was of the view that Mr. Brantley was deprived of using the Nevis News Cast (NNC). However, attorney for the appellants Parry and Daniel, Dr. Henry Browne QC, argued to the Court that Mr. Parry did not originate the policy of NNC, but the said policy was used by the CCM in government.

“Brantley is grabbing at straws? He has never put in an application to appear on or have programming on NNC during the NRP-led Administration, but I am glad he fought to change the CCM policy and now NRP will use the NNC for the NRP friendly television programming soon to come on stream,” commented Hon. Parry.

Match Report: Honours Even on Opening Day Of 2nd Betway Test as Fans Return to…