BASSETERRE, ST. KITTS (May 10, 2013) — For the love of her country, Ms Toovia Levine has her hands full. Proprietor of Anointed Beauty Salon on Rosemary Lane in Basseterre, she was approached by the People Employment Programme (PEP) and asked to take on a few interns, which she gladly accepted notwithstanding her regular workload. 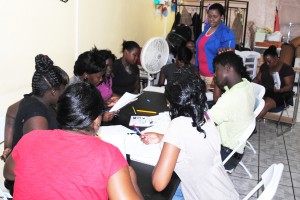 Eleven females and a male were assigned to her slightly over eight weeks ago for a six-month cosmetology training programme and she now has to alternate between her regular clients and the interns.

The delicate balancing act has been challenging, but Ms Levine says that it is worth the effort as she is ensuring that the country’s youths have skills they could utilise either by being employed or setting up their own businesses.

“I am teaching them everything I learnt because I am going from the text book, which is the text book I myself used,” says Ms Levine who trained as a cosmetologist in North Carolina, USA. “I am trying my outmost best in the time that we have, to give them as much as I learnt.”

According to Ms Levine, the six-month period is enough for the interns to get certified in line with requirements of the Caribbean Vocational Qualification (CVQ), which the People Employment Programme is using. She says that if the interns open up their minds and concentrate on the training, six months is more than enough.

“They have been here for eight weeks now and they have really improved,” noted Ms Levine. “On Tuesday (May 7) we had pedicures all day, and I was very impressed. I would say it was the best I have seen them work. I supervised them and they did very well.”

Normally the interns would volunteer to be ‘clients’ when they are doing practicals. On that day, three officials from the People Employment Programme, who were on a routine visit to check on the progress of the interns, Ms Telly Onu, PEP’s consultant; Mrs Celia Christopher, PEP’s training coordinator; and Ms Kenisha Fyfield PEP’s payroll officer were asked to volunteer.

“So far so good,” asserts Ms Levine. “We haven’t gone so far into practicals because a lot of theory has to be covered before they get to the practicals. But so far, it shows in the paperwork that they are learning. I give them tests and they have been doing well.”

Ms Linda Francis, 25, of Newtown and who had been without a job, decided to sign up with the People Employment Programme when it was launched, and chose the area of cosmetology for training because she has always loved doing hair and nails.

“It (the training) is giving me the skills I have always wanted to get,” says Ms Francis. “I am learning more and I am learning the professional way how to do it. When I finish the course I would like to open my own business as a cosmetologist to do hair, nails, manicure, pedicure and massage.”

The only male in the cosmetology training, eighteen-year old Kareem Chumney of Ponds Extension Newtown, says that when he signed up at PEP, he had initially wanted to do hospitality. However, that class was oversubscribed and he therefore joined the cosmetology class, and he says that he actually likes it now.

Ms Shamoya Phillip, 21, from Old Road is a single mother and says that the training is giving her a second chance in life after having dropped out of high school at the third form after she became pregnant, but was not given the chance to go back to school after the child was born.

“I always wanted to finish my exams so I could be more qualified,” says Ms Phillip. “I was at home doing my lil hair cause I know a lil much. I decided to come to this course so I could learn more and in the proper way how to shampoo a client’s hair etc, and how to use hair relaxers.

“PEP is good. I want to thank all those who associate with us, giving us these little jobs so that we can see our way and have a little change to pay bills. I am very thankful especially for me and for my son; the money coming in is good. I am thankful. I am taking everything very seriously and I know I will pass and get my certificate from the PEP.”

Nevis Water Dept. urging customers to pay bills at office due to setbacks from…