PM Douglas reports on outcome of 2012 during Budget Address

BASSETERRE, ST. KITTS, APRIL 10TH 2013 (CUOPM) – Notwithstanding a decline in investment, St. Kitts and Nevis is reporting that the surplus on the Capital and Financial Account and Other Financing proved sufficient to offset the deficit on the Current Account, resulting in an overall surplus of $66.5 million or 3.2% of GDP. 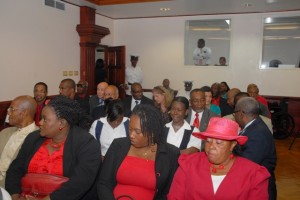 Delivering the 2013 Budget Address in the National Assembly on Tuesday, Prime Minister and Minister of Finance, the Rt. Hon. Dr. Denzil L. Douglas in summarized the Balance of Payments Account which records all receipts and payments between the Federation and the rest of the world.

“In 2012, the Current Account deficit declined by 24.2% to $180.6 million or 8.7% of GDP ($2,082.3 million) at market prices. This improvement is mainly attributed to the decline in net import of goods and services by 21.3% to $224.4 million or 10.8% of GDP. The downturn in net goods and services can be attributed to a decline in outflows in respect of the importation of consumer and capital goods, and the moderate increase in the exportation of electronic components. The Services Account increased marginally by 1.5% to $180.1 million or 8.7% of GDP as a result of a contraction in net travel receipts. The Capital and Financial Account recorded a reduction of 67.1% in the surplus to $161.3 million or 7.8% of GDP. Net Foreign Direct Investment contracted by 8.3% to $271.4 million or by 13.0% of GDP when compared to 2011 due mainly to the significant decline in equity investment,” said Dr. Douglas. 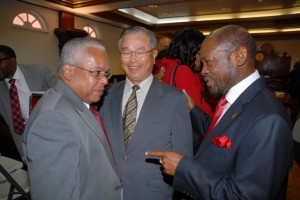 He noted that after five years of global recession, recovery is tipid as downside risks continue to threaten the economic rebound and the economies of the Eastern Caribbean Currency Union (ECCU), have shown evidence of some easing with a lower contraction rate of 0.5 percent in 2011 when compared to the decline of 2.6 percent in 2010.

“Mr. Speaker, the continued volatility in the global economy had a profound impact on our economic recovery during 2011 resulting in a contraction in real GDP of 1.9%. This can be attributed to a decline in output in the Construction and Manufacturing Sectors of 4.4% and 15.2% respectively, and the slowing of activity in the Tourism Sector resulting in a positive growth rate of 0.3% when compared to 5.4% in 2010. In January 2013, preliminary estimates provided by the Eastern Caribbean Central Bank (ECCB) and the Department of Statistics indicated that the economy contracted by 0.9% in 2012 and will return to positive growth in 2013 with output levels expanding by 1.9%. This projected early return to growth is particularly heartening in view of the ravages of the financial and economic crisis that still litter the global economy and suppress growth in advanced economies as well as emerging markets,” said the Prime Minister and Minister of Finance.

“This can be attributed to the stabilisation of prices following the implementation of the Value Added Tax (VAT). This was projected in 2011 in this Honourable House when we sought to elicit a concerted effort by the business community to transfer the savings of cheaper imports under the VAT regime to its customers. I use this opportunity to thank them for their partnership. We will continue to be vigilant, as in the past months severe weather conditions have destroyed crops in several regions of the world, including the United States. This has resulted in low yield in crops such as corn which is an important dietary staple and source of animal feed thereby increasing the probability of an escalation in food prices. The heavy rains in the latter part of 2012 and the drought now being experienced in our Federation have also negatively impacted some of our farmers and as a result have limited the availability of fresh local produce at the market place,” Dr. Douglas said.

He said his Government has worked diligently to ensure that the benefits of travel and tourism result in the improvement of the lives of the people and sustained growth in the economy.

“In a competitive global market where travellers have numerous options, transportation costs, air accessibility and interline connectivity often define our own competitiveness. Although we have little or no control over these factors, our decision to shift our focus to the higher end of the market, to invest in the development of a world-class airlift infrastructure and direct scheduled airlift arrangements, particularly from key cities in North America and Europe, are now showing positive returns,” said Dr. Douglas, who pointed to the partnership with American Airlines that has seen the addition of two non-stop flights between the Robert L. Bradshaw International Airport and the Miami International Airport arriving from Miami on Friday and Sunday nights and returning the following mornings.

“These two additional non-stop week-end flights are strategically timed to impact the peak winter travel season and allow for more connections from North American and International feeder markets as they provide options for later departures and earlier returns in and out of Miami, one of the largest airline hubs in the world. The days of the week identified have been found to be most ideal for our key niche markets, the destination weddings and honeymoon travellers as well as meeting and incentive groups. In addition, the seasonal Air Canada service introduced in 2011 resumed non-stop flights to St. Kitts from Toronto as of December 21, 2012. This flight makes the Federation a more viable winter destination choice for travellers from Canada while also providing easier access for our nationals both at home and in the Diaspora in the Toronto metropolitan region. Our twice weekly British Airways service from London continues to significantly improve our international connections to and from the United Kingdom (UK) and beyond,” said Dr. Douglas.

He noted that the tourism sector continues to attract significant investment in tourism related facilities and infrastructure. These infrastructure developments are a critical component in our efforts to expand our market share in attracting a more upscale clientele. In this regard we are now in the process of facilitating plans for the modernization and expansion of two of our local hotels. The construction of our world-class private jet terminal at the R. L. Bradshaw International Airport which commenced in February 2012 is expected to be opened in June 2013.

“This unique facility will include an arrivals and departure building which will accommodate customer service, immigration and customs, as well as an administration building which will provide top quality facilities for flight crew and staff. This private jet terminal will be the only one of its type in the region and will facilitate the increasing numbers of high-end clients who will frequent developments such as Christophe Harbour, Kittitian Hill, Park Hyatt and other similar developments in our Federation,” said Dr. Douglas.

He disclosed that work has continued at the Kittitian Hill Development with the construction of an eighty-five (85) room boutique cottage hotel and an 18-hole golf course.

“A number of one bedroom cottages and villas are in various stages of completion as well as the Kittitian Hill’s Terrace Complex which includes a lobby, lounge, bar, all day dining and fitness centre, and main swimming pool. Therefore, it is expected that Phase One of the project, under the management of Sedona Resorts, will open for the 2013 – 2014 tourist season. Similarly, the Christophe Harbour Development also continues to make progress on the construction of the mega-yacht marina, the ‘Harbour Side’ homes and ‘Windswept’ villas,” said the Prime Minister.

He noted that to further diversify the type of accommodations provided within this Development, my Government recently negotiated an agreement for the construction of a Park Hyatt branded Hotel which will have 200 hotel rooms and 50 residential condominiums.

“Phase One of this hotel will include the completion of 125 hotel rooms, 2 food and beverage outlets, a fitness center, a 12-room treatment spa and more than 7,000 square feet of meeting and banquet space. The second phase will include the completion of the 75 remaining guest rooms and a third food and beverage outlet. This hotel is scheduled to be opened in the winter of 2014,” said Prime Minister Douglas.

At the Silver Reef Resort Development, Phases One and Two, which feature seventy-two (72) apartments, have been completed and Phase Three commenced earlier this year. In addition, the St. Christopher Club Group of Companies will be investing almost US$40 million in three condominium and commercial complex projects in Frigate Bay. The quality of these accommodations will not only aid in attracting the more discerning traveller but provide additional employment opportunities for our people.

The performance of the Cruise Sub-Sector has remained robust due to vigorous sales calls on cruise lines as a means of extending the traditional tourist season to year round activity. As a result, cruise passenger arrivals expanded by 17.2% in 2011 and remained steady in 2012. Currently, we are projecting to pass the 650,000 passenger arrivals mark for 2013/2014 season and then go beyond 700,000 passengers in 2014/2015.

During the first quarter of 2013, a formal review of the Tourism Strategy which has guided developments in the sector since 2006.

“Much has happened in the world since 2006 – including dramatic technological changes which have ushered in the rise of social media. The unprecedented global economic recession, that is only now showing a sluggish recovery, has also forced the travel and tourism industry to wake up to the global competitiveness of our industry and the need for added value to the customer. The recent corporate consolidations and operational shifts in both the airlift and cruise industries have also impacted potential consumers’ travel decisions since we conducted our last major strategic planning in 2006. Therefore, with such rapidly shifting market demands, it was a necessary and timely decision for us to update our tourism strategy,” said the Prime Minister, who noted the changing tourism landscape in education tourism and the related influx of international students, faculty and family members who now live, study, do business, and enjoy the leisure activities available in St. Kitts and Nevis.

“The strategic evaluation will also incorporate the most viable findings of the recently concluded Small Hotel Sector Assessment undertaken with assistance provided by the European Union in order to formulate a holistic approach to the development of the small hotel sector going forward,” said the Prime Minister.

He said the center of the new tourism strategy will continue to be the improvement of the well-being of our people, and the sustainability of our natural and man-made assets for future generations.
“To this end, you can be assured that my Government will continue to pursue the development of a Tourism Industry that is of the highest quality, one that will bring sustained growth and development to our Federation, and that will result in better living standards for all of our citizens,” said Prime Minister Douglas.

Dr. Douglas said the construction sector has been a major growth area in the economy and the decline in output over the past four (4) years continues to impact the economic and social development of the Federation.

Government implemented the Building Materials Incentives Programme in June 2011 which provided for a reduction in taxes applicable to building materials for first time homeowners’ construction projects valued up to $400,000.