BASSETERRE, St. Kitts, September 16, 2017 (Press Unit in the Office of the Prime Minister) – Today, Saturday, September 16, 2017, St. Kitts and Nevis continued its longstanding tradition of honouring the remarkable legacy and contribution to national development of the nation’s five most illustrious sons of the soil, during the annual National Heroes Day Observance Ceremony, held at the historic National Heroes Park. 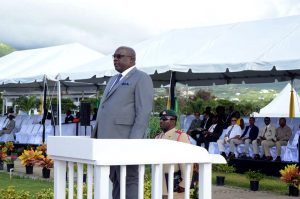 This year’s observance was attended by a wide cross section of society, including Government officials, representatives of the Diplomatic and Consular Corps and hundreds of Kittitians and Nevisians who assembled at the four-acre National Heroes Park, which has since been transformed into a space suitable for housing the monuments and historical information on the five national heroes.

In saluting the contributions and sacrifices of the Late Excellencies Sir Robert Llewellyn Bradshaw; Sir C. A. Paul Southwell; Sir Joseph Nathaniel France and Sir Simeon Daniel, as well as that of the nation’s only living National Hero, Dr. the Right Excellent and the Right Honourable Sir Kennedy Alphonse Simmonds, Prime Minister Dr. the Honourable Timothy Harris said these five individuals will be forever remembered for the qualities of their character and human spirit, which have set them apart.

“We hold them in high regard and esteem because they have risen out of a variety of circumstances renewed with fortitude, commitment and focus putting all of their energies and passion in service to our nation for the betterment of our people. What our National Heroes have done individually and collectively has determined the character of St. Christopher and Nevis. Each of them has played their part in shaping this our nation,” Dr. Harris said. 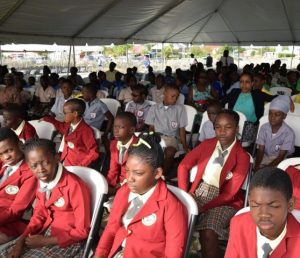 The honourable prime minister said the selfless and outstanding service of these men should be emulated by present and future generations.

“These, our sons came from humble beginnings and yet each one gave back to St Kitts and Nevis much that has improved it and ennobled us as a people. These men rose from a variety of circumstances. They refused to be constrained and pigeon-holed by those circumstances. Through discipline, hard work and ingenuity they made their mark indelibly on the national life of St. Christopher and Nevis.”

Prime Minister Harris continued by saying, “Our young generation needs heroes who they can look to for inspiration and under whom they can receive tutelage. They should find their inspiration, discover and actualize their talents instead of hiding them and shine like a bright star against the canopy of the night sky. National Heroes therefore are lights that illuminate a pathway through the darkness. They help to shape and develop a thriving and stable nation in which everyone can feel cared for, nurtured, protected and fulfilled.”