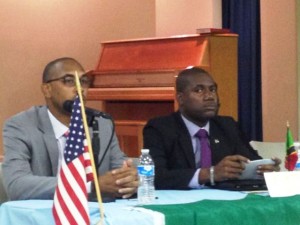 The dynamic duo made New York their first stop on their PAM UNITY North American Tour.
The meeting got on the way about 5:45 with nationals keenly awaiting the presentations of both gentlemen. Joining Hon Richards and Powell at the head table were former St.Kitts-Nevis diplomat and well known national Dr. Irving Sweeney and Bernardo Phipps both of whom formed part of the organizing committee for the event. Prominent and well known New York based National Lennox Liburd also gave remarks at the event.

Jonel Powell was the first to speak and gave an exceptional presentation which called on Nationals in NYC and the diaspora to play larger and more significant roles in the development of their home country.
“Nationals living outside have a role to play in our country’s development that must be bigger than just coming home to vote. They must support us, not just PAM or our UNITY partners or even the ruling Labour Party, but the entire country, not just financially but of their other resources be it moral or advice based on areas of expertise or lobbying where they can. Overseas based nationals must expand and heighten the role they play in our countries development.” said Powell.

“Nationals must never let their contributions to national development be reduced to simply coming home to vote every few years,” said Powell.

Powell also gave an exceptional account of himself and what he is offering as the next Parliamentary Representative of Central Basseterre.

The clarion call of UNITY was made by both Powell and Leader Richards and was echoed and supported resoundingly by everyone in the packed hall.

Richards and Powell’s next stop on this North American PAM UNITY Tour is Toronto, Canada on Wednesday July 17th where they will be meeting with Nationals at the St. Paul’s, L’Amoreaux on 3333 Finch Avenue East (at Warden Avenue), Scarborough, Ontario 7:00pm.

Then finally on Saturday in Miami at a venue and time to be announced.