Charlestown, Nevis (October 22, 2015) — They travelled to sister-island St. Kitts in the ‘fifties and contributed to the country’s economy by working in the sugar industry. After many years of toiling in the sugar fields they returned to their Nevis homes for a deserved rest.

That they had returned home before the official closure of the sugar industry in 2005, they were not paid anything when it happened. But as fate would have it, two residents of Gingerland Mrs Aurelia Tamar Huggins-Chapman and Mr Leonard Browne have pleasantly received gratuitous payments for the years they worked in the sugar industry in St. Kitts.

“Please go and tell Prime Minister Dr Timothy Sylvester Harris that I thank him very much for what he has done for us,” 77-year old Mrs Huggins-Chapman told two Sugar Workers Restoration Fund (SWRF) Officers who had travelled to Nevis to deliver cheques for senior Nevisian ex-sugar workers at the Federal Office in Charlestown on Thursday October 15.

Asked if he was thankful for what the Prime Minister had done, Mr Leonard Browne was not given the chance to reply because his wife Mrs Lillian Browne cut in and said: “How you mean? How you mean, man? If he (Prime Minister) were here I would hug him up and kiss him up.”

A message is good, only if delivered. Word was sent through to Prime Minister the Hon Dr Timothy Harris on the same day while he was officiating at the 12th Dr Harris Help-A-Child Programme bursary cheques distribution at the Molineux Seventh Day Adventist Church.

“I want to thank her (Mrs Aurelia Tamar Huggins-Chapman) in return,” said Prime Minister Harris. “Certainly the sugar workers repayment has been one of the more successful initiatives of the Team Unity Administration, and we are happy that we are getting resounding commendations both on the island of St. Kitts and the island of Nevis for effecting this.

“The praises have been great and perhaps ought to be so, because they come against a background in which the former administration had said there was no further monies to paid, that all who were entitled to pay-outs had in fact received them. The truth of the matter is that that lie has been exposed.”

According to the Prime Minister, over 3,000 persons applied indicating their grievance with the pay-out or lack thereof as it relates to them individually in 2005/06. He noted that his administration was this time around able to more than double the number of persons who received benefits in 2005/06 from 698 to 2,311.

“That is a significant difference,” commented the Prime Minister. “We are indeed appreciative to know that the hard work that we put in to executing this particular promise has met with widespread commendation and we are even of greater joy to know that the beneficiaries are located not just in St. Kitts, but equally on the island of Nevis.”

Back in Nevis, Mrs Aurelia Tamar Huggins-Chapman told SWRF Officers, Ms Thyra Gumbs and Ms Diana Duncan, that she was born in 1938 at Old Yard in Gingerland and that she moved to St. Kitts in the fifties where she worked at Camps and West Farm Estates. She could not remember when she stopped working, but was long before the industry closed.

“I heard it over the air, and my son Wendell Huggins who lives in St. Kitts told me,” she said when asked how she learnt of the new pay-outs to former sugar workers. “I worked very hard in the sugar industry.

“I go in the cane fields and weed, and head out cane out the ghaut to the tractor them when they come to load to go to the factory. So I thank God for that, and then the Hon Dr Timothy Sylvester Harris from St. Kitts. I feel great that they are paying us.”

She was accompanied to the Federal office by another of her sons, Mr Troy Chapman, who confirmed that he heard the information on the radio. “I feel good because when you work for so long and you get some benefit now you should feel proud. This is a benefit that would have been lost were it not for the Prime Minister, it is really needed and thanks everyone.”

Mr Leonard Browne, who was born in Stone Hills in Rawlins, Gingerland, in 1936, had moved to St. Kitts in 1950 to live with his sister as his mother had died in 1948. At that young age, he started off by picking cotton, but started working in the sugar industry in 1953 at Lodge, and later moved to Ponds Estate and other estates.

He was on and off the industry having married in 1959 and his wife remained in Nevis. He would come home after each crop over. He returned back to Nevis in 1966 and said that when the industry closed in 2005 he was not paid anything for the years he toiled in the fields.

“I hear the announcement about the new payments from the radio, and different people who work in St. Kitts tell me,” said Mr Browne. “I came and filled the forms. I never expected such a thing because when I used to work in St. Kitts, a little or nothing – I know sometimes I cut cane and I cannot make thirty dollars a week.  I had said that when I get that money, I will give the Lord all the thanks.” 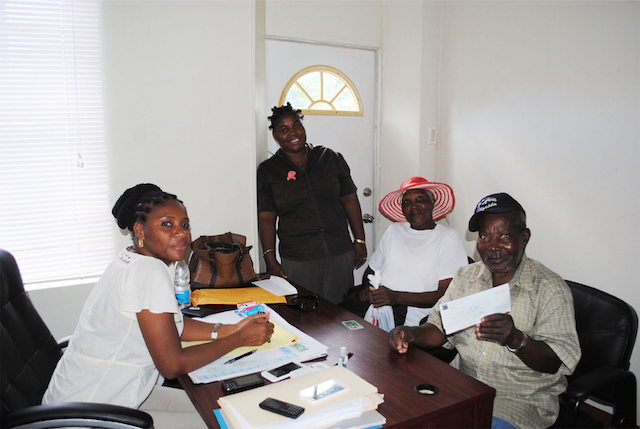