Rain again had the final say as the much anticipated second division finals matchup between Empire and Highlights commenced at the ET Willet Park on Tuesday 18th June. 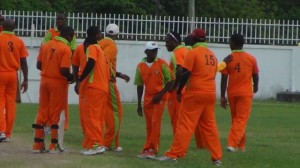 The calm, sunny outlook at the start of the game, only flattered to deceive and the fact that the NEVLEC crew was seen working on lines within the vicinity of the Park, posed ominous warning signs but fears were soon allayed when it was pointed out that it would not affect the lighting system for the match.

Empire batted first and the decent crowd on hand was thoroughly entertained during the innings which actually boiled down to an exciting T-20 encounter.

Highlights pulled off a shocker when they opened the bowling with former Leeward Islands leg spinner and current West Indies Masaage Therapist, Virgil Browne, recently returned from his duties at the ICC champions’ trophy. He did not disappoint. He clean bowled opening batsman Lornel Dore with a beauty, for a golden duck.

The very next over, fellow opener, Allan Powell edged one from the slow medium pace bowling of Southee and was brilliantly caught at slip by a tumbling Theron Bussue. Empire was then in dire straits and the Highlights team was understandably cock –a hoop but then Wasim Mintos joined the more experienced Colin Mills- Archibald and they teamed up in an exciting partnership during which they seemed bent on matching each other shot for shot and both of them were never hesitant to go aerial.

Archibald was later run out in bizarre fashion. He was struck on the pad. There was a loud shout for lbw and this was negated by Umpire Carl Tuckett. Archibald remained where he was, explaining to the fielders where he was struck and in the meantime, one of the alert fielders struck the stump with the ball and Umpire Rohan isles gave him his marching orders as he was found outside the safety of his crease.

Mintos continued merrily along, demonstrating that he was not nicknamed ‘Boom-Boom’ for nothing and his more renowned cricketing hero, Shahid Afridi would have been proud of some of the shots that he played.
One ripper went sailing towards Reliable Motors to collect gas and a slog off Wendell MICEY Wallace was last seen heading towards Swanny’s store at Cedar Trees, probably looking for early Culturama bargains.
The Highlights men knew that it would take something special to dismiss him and that is exactly what happened and in spectacular fashion.

Another heave –ho by Mintos off Wallace seemed destined for the Bar or Super foods but the dapper figure of Xavier Cornelius placed on the long on boundary, timed his leap to perfection and pulled the ball from the sky and rolled without losing it from his grasp. It was a stunning catch to indeed bring an end to a stunning innings.

As the Empire team completed their 20 overs and the Highlights team got ready to respond, down came the rain with the addition of thunder and accompanying lightening, to effectively bring a premature end to the game.

It is expected that the match will be rescheduled at short notice.