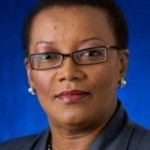 She made this observation last Wednesday during a courtesy call with Poland’s Ambassador to Barbados, Piotr Kaszuba, at the Ministry of Foreign Affairs.

During the meeting, McClean said the government was also seeking to find a solution to transportation within the region that would facilitate both passengers and cargo needs.

Looking at food production in Suriname and Guyana, she said such a vessel would also assist the region to tackle food security issues.

“We are sufficiently close in the Eastern Caribbean and the same way that cruise ships move over night and during the day from one country to the next, we can see vessels [doing the same thing] …,” McClean added.

Likewise, Kaszuba said Poland had vast experience in the shipping industry and pledged to assist Barbados in this regard.

The two officials also discussed a number of other issues including the signing of a double taxation agreement and strengthening ties through cultural cooperation.