Basseterre, St. Kitts & Nevis, March 20, 2017– On December 26, 2016, The Sandy Point Benevolent Society (SPBS) hosted an extravagant Award Banquet at the Marriot Hotel. The New York based organization chose to hold its 6th Annual Awards Banquet in St. Kitts & Nevis to celebrate the 50th anniversary of the Sandy Point High School (SPHS)/Charles E. Mills Secondary School (CEMSS). The dinner was under the distinguished patronage of Hon. Shawn Richards, Deputy Prime Minister of St. Kitts & Nevis.
Members of the SPBS scholarship committee and Mrs. Kimarah Isaac, chair of the SPBS scholarship committee used this grand opportunity to recognize the 2016 scholarship winners and students of its mentorship program that were present. 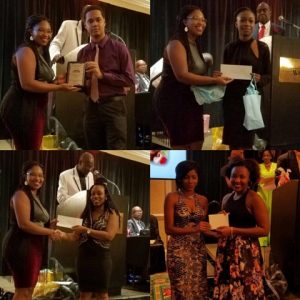 There were two scholars that graduated from the Clarence Fitzroy Bryant College. Mr. Dijani Laplace, who received the Principal’s Award in 2009 upon entering the Charles E. Mills Secondary School and Ms. Devatrea Mike, who received that same award in 2007.

Miss Azariah Vanterpool, also received the Principal’s Award in 2011 and she was awarded $400 for successfully graduating from CEMSS.

Ms. Rae-Dawn Richardson, is one of two candidates that received the Ridley Guishard Memorial scholarship of $2,500 sponsored by Dr. Hanna Guishard. She is currently pursuing a Bachelor’s degree in Accounting with a minor in Psychology at the University of the Virgin Islands. Mr. Xavier Brown, who also won the award last year has been pursuing his dream of becoming a doctor at the Latin American Medical School in Cuba.

Mr. Crios Freeman of St. Pauls, was the winner of the Sir Hugh and Lady Claudette Graduate Scholarship award in the amount of $2,000.

Ms. Shanica Mills, also of St. Pauls was the winner of the Sandy Point Benevolent Society Scholarship for undergraduate studies in the amount of $1,000. Past students of the Sandy Point Principal award will automatically qualify for this award. Ms. Mills recently graduated from Monroe College with a Bachelor’s degree in Business.

Students who receive an award from the Sandy Point Benevolent Society are automatically enrolled in the SPBS mentorship program. This program strives to enable all members to be academically and socially prepare to tackle issues that may prohibit their success. Candidates are encouraged to take part and give back to the Sandy Point Community.

These scholarships bear testimony to the continued commitment of the Sandy Point Benevolent Society to strengthen investment in education in St. Kitts. SPBS wants to congratulate the accomplished students who were awarded our 2016 scholarships. Each winner demonstrated outstanding scholastic achievements and community service. We look forward to great things from all of these young prospects as they have all shown great promise in not only academics but athletics as well.