The second division finalists in the local Cricket tournament have been finally determined-and that without a ball being bowled. 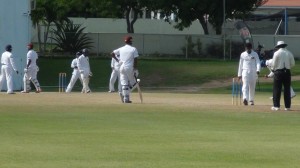 The semi final match scheduled several times over between Highlights Int and Pennyless All Stars, was once again rescheduled for the ET Willet Park for Thursday 6th June.

President of the Nevis Cricket Association, Keith Scarborough informed that both teams were duly informed but only one team showed up for the match. That team was the Highlights Int.

The pitch had been prepared by grounds man Jabal Tyson. The points were therefore duly given to the Highlights Int team.

Scarborough further informed that the finals will now be played on Tuesday 11th June at the ET Willet Park. The two teams on show will be Highlights Int. and Empire.

When teased about his easy entry into the finals, experienced Masters’ player, Wendell MICEY Wallace responded: “We are accustomed to making it to finals