Basseterre, St. Kitts, May 04, 2016 (SKNIS): Minister of State with responsibility for Social Development, Honourable Senator Wendy Phipps, acknowledged that seniors now have the opportunity to enjoy the fruits of their labour upon retirement.

This was demonstrated at the Older Persons’ Fun Day which took place last Friday, April 29, at the Kim Collins Athletic Stadium.  Minister of State Phipps informed that Permanent Secretary in the Ministry of Health, Andrew Skerritt; Deputy Director of Social Services, Ann Wigley; and herself had journeyed to Nevis to observe the Older Persons’ Fun Day that had taken place last year October as part of the activities commemorating the Month of Older Persons.  She said that she had been impressed and certain key aspects had been emulated at the Fun Day in St. Kitts.

“One of the key things that we would have come away with from that programme is the realization that just because somebody is getting older, it doesn’t mean they don’t have a life anymore, it doesn’t mean they don’t have anything to contribute,” Minister Phipps said, noting that oftentimes it is during retirement that individuals have time for the things they really enjoy.  “You would have spent a lifetime building a house, raising children and paying for a mortgage.  Now this is the time that you get to enjoy your life ‘til the good Lord takes you.”

Junior Minister in the Ministry of Gender Affairs, Social Development with special responsibility for Gender Affairs, Social Development, Youth and Sports Affairs, Hazel Brandy-Williams, travelled from Nevis to be with her ministry counterparts in St. Kitts.  She acknowledged the visiting contingent of older persons from Nevis, who took part in the festivities and thanked the organizers for coordinating the event just for seniors.  The day of fun was also attended by students from the Seventh Day Adventist School along with a teacher.

“It is very important that our seniors continue to stay fit, so that they can be independent and so activities such as this would assist them in that way,” Junior Minister Brandy-Williams said, before speaking directly to the older persons in attendance.  “You are important to us as seniors; you would have built the strong foundation on which we the younger ones will continue to build.  And so for the contribution that you have built over the years, we are truly thankful.”

Several older persons were also congratulated on attaining hallmark birthdays.  Minister Phipps noted that it had been a pleasure earlier that week, for Mrs. Wigley and herself to celebrate with Amos Davis of Saddlers on his 100th birthday, particularly since it was rare for males to attain that milestone.  Another male centenarian, Samuel Depusoir was in attendance at the Fun Day.  Millicent Connor of St. Paul’s who is 96 years of age was also acknowledged. 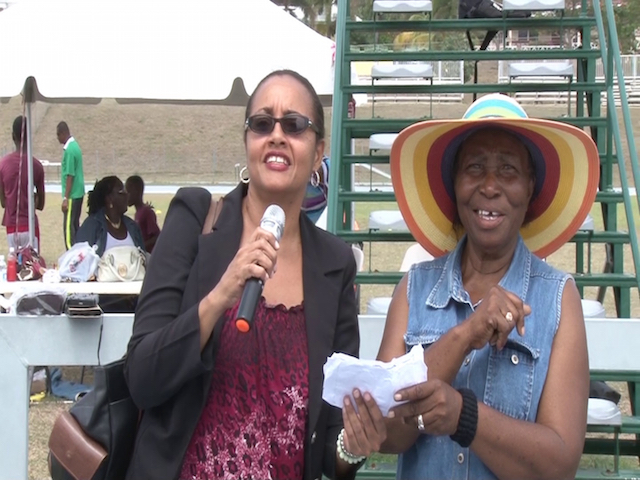