The ceremony was held at the Gingerland Secondary School in front of a packed hall of adoring parents; family members and well wishers. 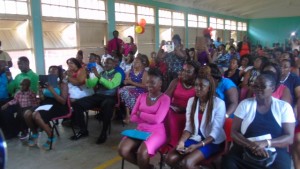 The ceremony started impressively with the Dads of the seventeen graduates, proudly walking alongside them in the processional, holding their hands, as they made their grand entrance into the main hallway.
The theme for the afternoon’s event which was ably chaired by Mr. Jervan Swanston, was: “Serving children with love and dignity.’

Teacher Judith Jones delivered the invocation and this was followed by an outstanding rendition of the national anthem by the graduates.
Headmistress Mis Viana Stapleton gave a comprehensive review of the activities with which the school was involved over the past year.

These included an exciting sports day; a visit to the senior citizens home in Gingerland and a walkathon which climaxed at the Botanical Gardens.
She thanked the parents for allowing her and her dedicated staff to be able to help to lay the foundation for the children and beseeched them to continue to give them the same type of encouragement and attention that they received at the preschool.
Education Officer responsible for Early Childhood Development, Mrs. Dawny Lanns in representing the Ministry and Department of Education, congratulated the teachers for a job well done and also congratulated the graduates as they prepare to go to ‘big school.’
She admonished the parents to continue to play a leading role in their positive development.

The feature address was delivered by long serving Headmistress at the Elizabeth Pemberton Primary School, Mrs. Marion Lescott who zeroed in on three ‘R’s.’
Respect: Deep appreciation for someone due their influence and achievements. She beseeched the parents to be good role models to their children.

Responsibility: Being accountable. She asked the parents to teach the children responsibility from an early age. One example is to assign them with chores.
Readiness: She opined that parents should know when children are ready for certain specific activities and guide them accordingly.

The speeches were interspersed with poetry; songs, drumming and dance by the graduates and other children of the school.
Two of the choice moments of the evening were the drumming session by the children under the guidance of BINGHI Parris and a scintillating presentation of the masquerade dance moves.
The main highlight of the evening was the presentation of gifts and certificates. These were presented by Mrs. Marion Lescott.

Special awards were given as follows:

The vote of thanks was delivered by parent, Mr. Marvin Chapman and the graduates, after rendering their final song, marched out of the hallway with their lit candles, as members of the audience applauded them during the recessional