Several Nation-Builders Honoured For Their Contribution on National Heroes Day 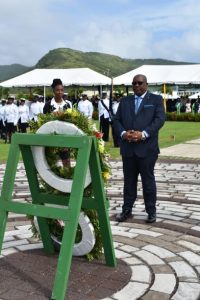 The Governor General, His Excellency, Sir S.W. Tapley Seaton, approved the following National recipients of Honours Award, which is consistent with the National Honours Act.

The National Honours Act established a trio of merit-based awards, which includes the Medal of Honour, the Companion of the Star of Merit, and the Order of National Hero.

This year’s recipients of the Companion of the Star of Merit include Dr Calvin Hazel – for Spiritual Development and Advancement of our People; Bishop Joseph Henville – for Religion and Community Development; Mr Erstein Edwards – for Public Service and Diplomacy; Mr Augustine Merchant – for Agricultural Development in Service to the Nation, and Mr Bruce Skerritt – for Music locally, regionally and internationally.

“Heroes are important, whether they are political or religious leaders, entertainers, or athletes,” said Prime Minister, Dr. the Honourable Timothy Harris, during the ceremony. “They serve a purpose in our society and they help give people hope and provide examples for success.”

He added “Through the story of their successes (and indeed their failures too) other people can understand their talents and their will to succeed. Perhaps nothing is more powerful than the power to inspire.”

“We Will Put You First Every Time!”