By: Linda Hadi-Williams
The opening ceremony of the Shadehouse Showcase attracted a capacity crowd of local residents and political officials on a bright and early Saturday morning.

Margaret Stevens, the Home’s Administrator delivered the Project Overview stating that the Shadehouse Project “has been a long time coming, but I believe nothing happens before its due time. Since 2016, I have been trying to get this project started and had many false starts. This project has the potential to open up educational and entrepreneurial opportunities for the Home and the children that are residents here.” Using an analogy given by Minister Louis Farrakhan at the 2004 Labour Party Gala he said, “If you depend on someone to feed you – you are a slave but if you have the means to feed yourself and others you are kings and queens. In that same speech he went on to say that if you spit on the St. Kitts soil something will grow.” This is telling of just how fertile the land is. “. . . now in just a few short weeks we have harvested lettuce, broccoli, cabbage and cucumbers,” Ms. Stevens added.
This project was made possible in part with a GEF Small Grant under the leadership of Mrs. Illis Watts, the National Coordinator of GEF SGP UNDP for St. Kitts and Nevis.
Closing out the program was Ms. Jackie Flemming, the Project Manager who took a moment to recognize the contributions made by the Director of Agriculture, St. Kitts, Mr. Melvin James and the Backyard Garden Association through the efforts of Mr. Stuart Versailles and team. So many, others have lent their assistance to bring this project to fruition including Ms. Shannizua James, Nigel Walters, Julian St. Clair, Kamal Connor and the Home’s residents.
“This is what has essentially brought the St. Christopher Children’s Home to this most significant milestone today – the insight, commitment and hard work of several and not just one singular body – the recognition that “WE” are more powerful working together towards a common goal, stated Ms. Flemming. She further stated “It’s not just about providing the “fish” but empowering recipients to actually fish and transform their efforts for future sustainability.”
We often say it takes a Village to raise a child and the Village really came through on this project. 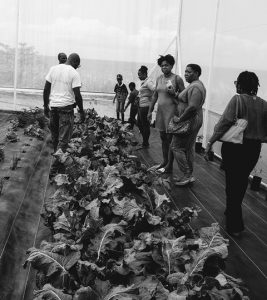